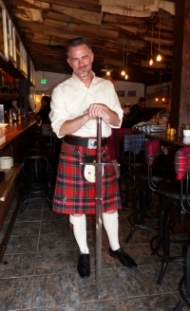 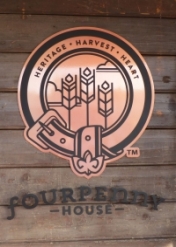 The Scottish pub and restaurant was inspired by owner Peter Soutowood’s family travels to his ancestral homeland in Scotland.

“Scottish food represents the flavors of the landscape,” says Soutowood, wearing a Scottish kilt during an industry night sampling of the fare. 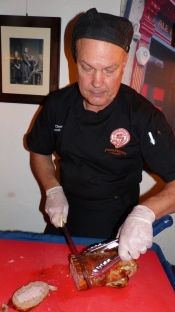 erry aioli, and Yorkshire pudding. There was also a meat-lovers' Banger Yorkshire wrap consisting of sausage with tomato, pesto, potao, pickled onion and cheddar wrapped with pork belly around a cured pork loin.

Some recipes were handed down in Soutowood’s family, notably a shortbread mother of his great-great-great grandmother. The establishment is open for lunch, dinner, Sunday brunch and a traditional roast on Sunday afternoons.

In addition to hearty fare such as roasted leg of lamb, there are also popular favorites such as fish and chips, oysters, and vegetarian options such as curried cauliflower and a Fourpenny salad. 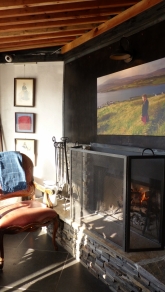 The ambience is as warm and cozy as any highland Scottish pub,  with dark wood booths, a central long table with tartan-clad stools for gathering and making new friends, a sword gifted by La Mesa’s mayor, old family photos on the walls, and a front fireplace topped by a portrait of Fourpenny Scotland north of Inverness, the crossroads that inspired the name.

Scottish music plays on an intercom, paused long enough for Soutowood to address the crowd, thank all who made his dream come true, and then entertain guests by playing “Skye Boat Song” on the bagpipes. (View video of Soutowood on bagpipes) 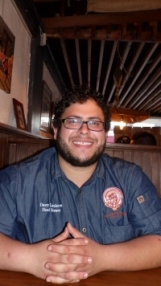 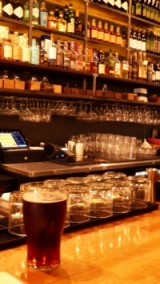 Head brewer Davey Landeros says in creating craft brews for Fourpenny, he drew inspiration from an Inveralmond red IPA and added some creative twists to his concoctions.

“Most  Americans associate Scottish beer with a wee heavy,” he says. “I wanted a beer people can drink over and over. So I looked at Scottish light; it was lower in alcohol but not hoppy enough for American consumers. So I also looked to English-style pub bitters.” He added a wee bit more hops and bitters, and says other beers will have flavor adjuncts. Beatrix Bond will have chamomile and lemon zest, for example. 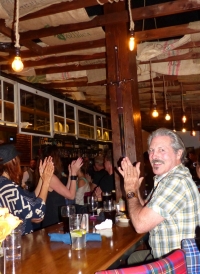 Pacific Cret Ale was inspired by Soutowood’s adventures on the Pacific Crest Trail and replicates pine, sage and juniper in a rye pale ale with “spiciness and rugedness,” that also includes lemon grass, says Landeros.  “We’ll be doing a coffee milk style called Stout, inspired by Café du Monde in New Orleans,” he adds.  The latter is being produced with help from Common Good Coffee, a wholesale outlet in La Mesa providing chicory that you can also taste in a Caldenoian Coffee drink with Scotch whiskey, brown sugar and floated heavy cream.

Landeros, who worked at a craft cocktail bar in the San Diego Gaslamp District previously, says, “I want to offer consumers a unique experience whe you come in – not just the food, but the beer as well.”

Executive Chef David Chenelle says he’s “really happy in my hometown to be opening a restaurant.”

Soutowood says each of his trips to Scotland have involved multi-generational members of his family.  “This is a family tree,” he says, adding that he put up family pictures because “they are all part of me. We want to make this a place that connects with your house as much as it does with ours," he concluded, drawing applause and thumbs up from industy professionals present.