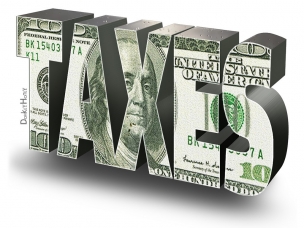 A new report by the Congressional Joint Committee on Taxation reveals that the Senate version of the bill would ultimately raise taxes on Americans under $75,000 by 2027 and would raise taxes starting in 2021 on those earning $10,000 to $30,000, offering only limited short-term savings such as an increased childcare credit, but long-term losses for low and middle-income Americans.

It would also increase the federal deficit to over $1.5 trillion over the next ten years, the New York Times reports. Approximately 80 percent of the tax cuts would go to corporations, businesses and the wealthy, the San Diego Union-Tribune reports. The measure would take away popular tax credits such as deductions for state and local taxes paid.  It lowers taxes on the highest income earners from 39.6 to 38.5 percent and dramatically slashes corporate taxes from 35 percent to 20 percent starting in 2019.

Next up the measure goes to the Senate, where it has already passed a key committee. The Senate version has a major addition – mandating repeal of the Affordable Care Act, or Obamacare, despite repeal of the ACA failing to win passage repeatedly as a stand-alone measure.  Another key change is tax cuts for individuals would be temporary under the Senate plan for ten years, while cuts would be permanent under the House version.

Forbes has a detailed breakdown comparing many aspects of both bills:  https://www.forbes.com/sites/anthonynitti/2017/11/10/senate-releases-its-tax-bill-how-does-it-compare-to-current-law-and-the-house-proposal/#75ed75854425

Trump hailed passage of the House measure.  “Congratulations to the House of Representatives for passing the #TaxCutsandJobsAct — a big step toward fulfilling our promise to deliver historic TAX CUTS for the American people by the end of the year!“ he tweeted.

Hunter has called the House bill a “once in a generation” shot to boost the economy and fix a tax code he sees as flawed.  But he concedes, “This legislation is not perfect,” the San Diego Union-Tribune reports. Hunter would prefer higher caps for mortgage income deduction to allow for high property costs here in California.

Issa echoed Hunter’s concern on that point, but voted against the bill.

But at least two of Hunter’s opponents in the 2018 election have sharply criticized his stance.  Democrat Ammar Campa-Najjar posted on his Facebook page: “Hunter Jr. has abandoned taxpayers and has brought national shame to our district. Who does this hurt?  The sick, the disabled, the elderly, homeowners, students, teachers, everyone but the wealthy. We deserve better, and are better than Duncan Hunter Jr.”

Josh Butner, also a Democrat, posted on his Facebook page after the Nov. 16 vote, “Today, Duncan Hunter turned his back on his constituents and sided with big corporations. Rather than putting the middle class and small businesses first, Duncan Hunter voted to increase taxes on working families and stick our children with the bill so they can pay for cuts for corporations that working families should have received. The people of California’s 50th Congressional District deserve better!”

Among San Diego County’s other representatives, Democrat Susan Davis faulted Republican leadership for failing to cooperate with Democrats to find a bipartisan solution that would be “fairer to the American people who deserve to keep more of their hard-earned dollars.”

Democrat Scott Peters, a former tax attorney, said the tax code is outdated and has loopholes that need to be reduced, also calling the international tax system noncompetitive. But he voiced concerns about the House bill increasing the national debt and said it would harm the economy, the Union-Tribune reports.

But the most scathing criticism came not from Democrats, but from the normally staid and conservative Forbes business magazine.

Forbes article states, "There's no economic justification whatsoever for a tax cut at this time. U.S. GDP is growing, unemployment is close to 4 percent (below what is commonly considered "full employment, corporate profits are at record levels and stock markets are soaring. It makes no sense to add any federal government-induced stimulus to all this private sector-caused economic activity, let alone a tax cut as big as this one."

The Forbes analysis continues, "This is actually the ideal time for Washington to be doing the opposite. But by damning the economic torpedoes and moving full-speed ahead, House and Senate Republicans and the Trump White House are setting up the U.S. for the modern-day analog of the inflation-producing guns-and-butter economic policy of the Vietnam era. The GOP tax bill will increase the federal deficit by $2 trillion or more over the next decade (the official estimates of $1.5 trillion hide the real amount with a witches brew of gimmicks and outright lies) that, unless all the rules have changed, is virtually certain to result in inflation and much higher interest rates than would otherwise occur.  The GOP's insanity is compounded by its moving ahead without having any idea of what this policy will actually do to the economy. The debates in the Ways and Means and Senate Finance Committees and on the House floor all took place before the Congressional Budget Office's analysis and, if it really exists, the constantly-promised-but-never-seen report from the Treasury on the economics of this tax bill."

A Senate vote could come right after the Thanksgiving holidays. Critics contend Republicans are trying to ram through the measure before opponents can mobilize. But passage in the Senate is not a slam-dunk.  Republicans can afford to lose only two GOP votes, and at least one Republican Senator has already announced opposition.

If a Senate bill passes, it could then require reconciliation with the House version, after which a final measure would go to President Trump, who is expected to sign.

If you wish to reach your Senator or Congressional member to voice your views, here are their contacts:

Don’t know who your Congressional representative is?  Type in your zip code at this link to find out:  www.house.gov/writerep