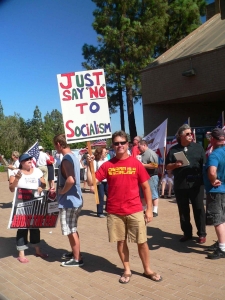 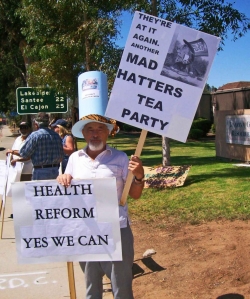 In Ramona, liberals from the Ramona Forum (www.ramonaforum.com) staged a “Mad Hatter Tea Party” counter-protest across the street from a T.E.A. party event to “demonstrate the hypocrisy of the Tea Party gang,” said Dave Patterson.

The group played the song “We don’t need no education” on a CD player, carried facetious signs, and urged passersby to sign a petition to end socialism. “It was a pledge to end welfare, medical, emergency room use by the uninsured and illegal aliens, Medicare, Social Security, VA, police, library and many more [government services] including CalTrans,” Patterson told East County Magazine in an e-mail. “Needless to say, we didn’t have one signer!” 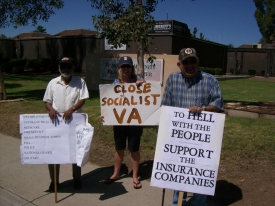 He believes the messages provoked some people to think independently instead of relying solely on conservative leaders or media. “One kid asked me who would fight crime if we did close the police stations?” Patterson recalled. “I told him to ask the nuts across the street.”

Speakers at T.E.A. Parties reflected the conservative crowds' discontent.  “I know why T.E.A. parties got formed—because you are sick and tired of political elites ramming stuff down your throat,” Sheriff candidate Jim Duffy said at the El Cajon event. “You have a voice and you are using it.”

In Washington D.C., the T.E.A. Party movement drew a substantial crowd, though initial reports on crowd size appear to have been inflated. ABC News has issued a statement saying ABC was misquoted by some news organizations and that it estimated crowd size in the “tens of thousands,” not 600,000 to 700,000.  Most news agencies confirm the tens of thousands estimate, though some have ranged upwards to the millions.

The conservative Washington Times confirms that “some photographs showing immense crowds that appeared on some conservative Web sites turned out to be pictures of a demonstration 10 years ago.”  In any case, the T.E.A. Party rally in Washington, while substantial, was likely far smaller than the Million Man March (which drew an estimated 400,000 marchers), the 2005 anti-war march (200,000 to 500,000) or the Obama inauguration (1.5 to 1.8 million, by most estimates). 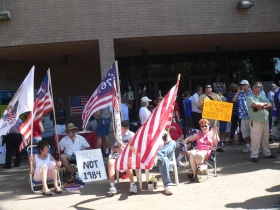 In El Cajon and across the nation, some demonstrators on both sides waved flags and bore patriotic messages. 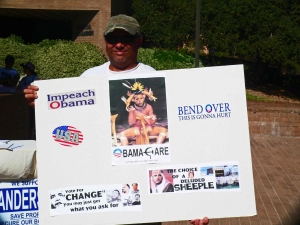 But there was a dark side to the rallies, with some T.E.A. Party protesters carrying signs with racist messages or images, profanity, and veiled threats. In El Cajon, one sign depicted Obama as an African tribesman with a message reading “Bend Over, This is Gonna Hurt”; another sign read “F**k Obama with a red X across the President’s face.

Patterson, a Viet Nam veteran and leader in the peace movement (http://www.sdvfp.org), expressed concern about the decline in respectful civil discourse regarding  political issues.

“What we don’t see is people dealing with the issues. They are dealing with all these emotional innuendos,” he observed. “What happens is that people’s actual ideas are discounted regarding the specific problem, such as healthcare. From the other side, they would look at us as some kind of socialist liberals and discount us, and we would see them as racists and discount them. As a result,” he concluded, “everybody winds up yelling at each other, nothing gets done, and the politicians take us to the cleaners.”

Even after George Bush admitted on the tee vee that Saddam had nothing whatsoever to do with 9-11, in essence, admitting he lied this country into meaningless war, the tea bags ridiculed antiwar protestors and insisted we respect THE OFFICE OF THE PRESIDENT NO MATTER WHO OCCUPIES IT. Hypocrisy in it's full glory, as they now attack at will Barack Obama for anything and everything. After seeing these signs, to deny a racial component is a joke!