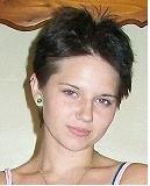 April 8, 2010 (El Cajon) – The Sheriff seeks public help to locate Marie Faustman, 15, who has been missing since April 1st. Her mother, Wendie Faustman, dropped the girl on Pepper Drive in the unincorporated area of El Cajon at about 7:00 that morning. Marie asked a friend to take her to Taco Bell in Mission Gorge Road in Santee at 4 p.m., where she was to meet another friend.  She has not been seen since and has had no contact with any friends or family. Her cell phone was powered down on April 3rd.

Marie and her mother now live in San Diego, but all of the girls’ known ties with friends are in Lakeside and in the unincorporated areas of El Cajon.

"I lost my job in December, then we moved in with my brother in Hillcrest," Wendie Faustman told East County Magazine. "I know it’s been hard with her with all the changes."  She believes her daughter left voluntarily, since she said she was spending the night with a friend, but the friend has denied knowledge of any such arrangement.  Marie ran away once before and was found after a tipster spotted a poster and notified the family.

The missing teen has a history of asthma and is believed to have her inhaler with her.  She is 5 feet tall and weighs 110 pounds, with short dark hair and blue eyes. She has three piercings in each ear including one with a spacer.  She has no known scars or tattoos.  It is unknown what she was wearing when she went missing.

"She loves going to the malls, being out late," her mother said. "She likes Lady Gaga and all that kind of music; hanging out with friends."

Wendie Faustman is hopeful that her daughter will be found. "We've heard from people as far away as London saying our prayers are with you," she said.  She hopes to eventually find work so she can afford a home for herself and two daughters, Marie and her 17-year old sister.  A third daughter is grown and living on her own. None have heard from Marie since she went missing.

Detective Rouse was not available when East County Magazine called to ask why it took a full week for the Sheriff’s office to notify media about a missing teen in East County. A spokesperson at the Sheriff’s media line was also unable to respond to the question.