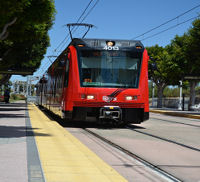 September 19, 2012 (La Mesa) – A 16-year-old girl was robbed in the Spring Street Trolley Station, 4250 Spring Street, on September 17 at 6:47 p.m. According to La Mesa Police, the victim was in the parking lot near the bus stop when she saw the suspect. She walked away to the opposite side of the lot, but the suspect approached and grabbed for her purse on her shoulder. The victim began hitting the suspect with her cell phone, trying break away. He grabbed her cell phone and ran downstairs towards Spring Street.

The victim went to another location before calling the police. The victim was not injured during the struggle.

The suspect was described as a black male adult, 40-45 years old; with a “salt and pepper” mustache. The suspect was wearing a “dirty” grey hoodie with the hood up, a black baseball cap and blue jeans.