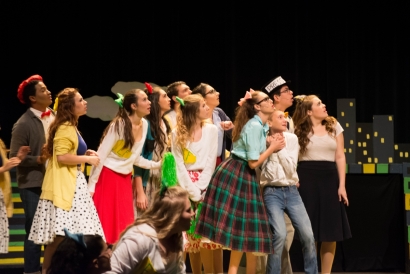 November 16, 2016 (Santee) - On a deeper level, Zombie Prom is about change and acceptance. In the after show talk back, one of the actors commented not only had one student changed, but that she was proud of how much the entire cast had grown through the process of putting on the play. Growth through life experience as an actor and person--that's what high school drama is all about. 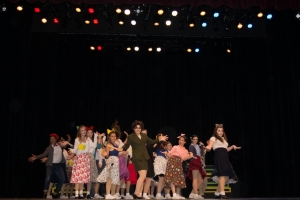 Zombie Prom, a satire of fifties musicals, is.basically a romance.  Teenagers Toffee and Jonny meet  when he is new in school. They fall in love, but Jonny is the bad boy. When Toffee's parents disapprove, Toffee dumps Jonny. Being  an orphan, nobody has ever love Jonny until Toffee. Unable to handle the rejection he kills himself. Toffee can think of nothing but Jonny, and her love brings him back as a zombie.

The star of the show at West Hills High for me was Analisa Reynoso as Delilah Strict, the principal, a strong character and Analisa nailed it. Second, Ryan Fagan, as Eddie Flagrante, Expose reporter, and counterpart to Delilah. Emily Tripp played Toffee, with the voice of an angel. Dustin Russ played Jonny, and pulled off the Zombie in love. Kristina Davidson as Candy, a little bit of a stand out. The rest off the cast worked enthusiastically to blend into a high school student body that made the show pop, 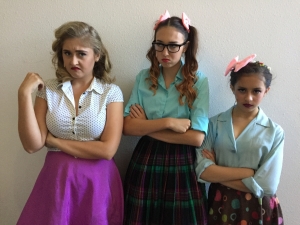 Once again MJ Turner spun her magic as choreographer with two stand out pieces for me. I was impressed when the entire cast tapped together for about thirty second. On the dance phenomenon "So You Think You Can Dance.," they always proclaim how hard tap is to learn. So they won't do rap numbers as a genre. Having had some tap myself I feel it's no harder than the rest of the dances they must learn, and MJ proves me right. Kudos. The Zombie dance at the end of the first half was out of this world.

Zombie make-up.amazing, colorful costumes, and a cool program cover, adds up to fun.

In the Spring the Dramakids take on the serious play."The Crucible." and the show dates are March 24th, 25th, 31st, and April 1st.