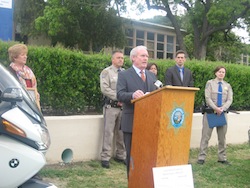 Border Division California Highway Patrol Chief Jim Abele shared some grim statistics. “In April 2012, CHP issued over 1000 citations in San Diego County. Texting and driving continues to be a problem in California. 22% of all crashes in California are caused by distracted drivers. We will continue to educate the public about the problems of distracted driving in 2013. There’s no reason to text when you’re driving.” 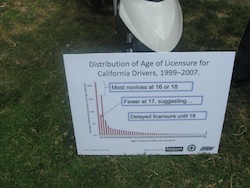 “I brought a picture of my son Donovan.” She told the story of how her son was killed in a collision. “He didn’t drive that night; he was going to the movies. After Donovan’s death, the passengers spoke up and said, ‘Danica, we were afraid you were driving too fast.’ She told them, ‘You know what? I was afraid too.’ Parents, use your voice to talk to your teens. I want you to know your one voice may be the only voice that speaks up. For teen drivers, don’t cave into peer pressure. One voice, that’s all it really takes.”

Then, the GUHSD Superintendent Ralf Swenson spoke. “We’re in the job of education. The number one killer of teenagers in America is reckless and distracted driving. That’s why we invited partners from CHP.” Talking about the school assembly for the Grossmont High students, “Hopefully, they will take it away and share with their friends.”

Officer Pennings wrapped up. “In conclusion, I invite you to look at the charts and graphs in front of you. WE all know how the first year driving is the most dangerous. I thank you for your time.”

At the assembly, Officer Pennings spoke first. “We have this very important program, Impact Teen Drivers.” There was a PowerPoint about it. The question on the first slide was what he wanted the students to think about ‘What do you consider lethal?.  The following slides offered top answers from teens surveyed, which included lip gloss, lattes, and texting, which takes your mind off driving. Then, he played a video, where an anonymous teen spoke about the impact teen drivers program, and how this has personally affected her when a distracted driver killed her parents and niece. Then, it went to the story of Donovan. 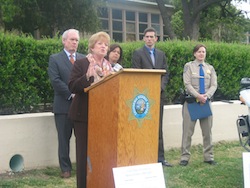 It was the last day of summer football practice. Donovan’s mother, Martha, agreed to let him go to the movies with friends. Since he didn’t have his license yet, his girlfriend, Danica agreed to drive. Danica, the ‘granny driver’, always drove safely, following the rules and never getting a ticket or citation. After the movies, as they were heading home, her friends, Alex, Dustin, and Gavin pressured her to drive faster and straighter. After veering the wheel hard to the right, the car crashed into two trees. After the car crashed into the first tree, the back door flew open, and Dustin, Gavin and Donovan flew out of the car and hit the pavement. Donovan died instantly, the other passengers were injured, and Danica was trapped in the car.

Pennings then introduced Martha Tessmer again.“We care about every one of you. We chose to take our darkest moment on here and explain what happened in a single night, so  you will make different choices. I brought my son’s letterman jacket and his football. He was the football star. In his junior year, on Friday night football highlights, they announced his name. Less than a year later, they announced his name because of his death. By the end of his junior year, he had received 25 letters of interest from colleges all across the United States.”

She showed pictures of Donovan with his family and friends. “His family meant the world to him. He has an older sister Megan. They enjoyed supporting each other. He joined weight lifting after starting football. He was the kind of guy who lifted others up. Then, he took up track. He also took up guitar and band. The last sport he took up was surfing.” She spoke about he loved trying new things and showing them to his friends.

After reiterating the story of her son’s death, she explained, “The next day, instead of visiting with the scouts, it was his memorial service. He touched over 200 lives.” His six best friends on the football team carried his casket. “We [she, her husband and daughter] went to every game that season. We took Donovan home. His ashes are in the bird bath. His favorite place to be was home.”

She then talked about what happened to Danica. “She spent the next five months going to court hearings. She received four counts, which counted for each year she would be in prison. She wants you to know that it doesn’t get easier in time.”

The take away message at the end of the presentation was this: “Every time you get into a car, you need to make good choices. Go check out http://whatdoyouconsiderlethal.com.”

Officer Pennings took over after Tessmer. “I know that wasn’t easy to do. You know who the most dangerous drivers are? 18 year olds. There’s no such thing as accidents. There are collisions and fatalities.” Then, each student was invited to get a T-shirt to wear this year instead of throwing out shirts to the students, like they have done in previous years.

T-shirts can be found at: http://www.zazzle.com/wdyclmerch.

You can also visit http://impactteendrivers.org.