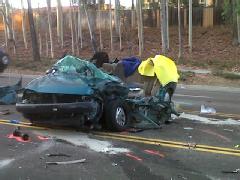 The teen driver and a 15-year-old passengers were critically injured with major head trauma. They were flown to Scripps La Jolla Hospital by air ambulance.

The Escort swerved into oncoming traffic and struck a Toyota Prius, then slid sideways into a Ford F-150 driven by a woman and her 12-year-old sister.

Two other teens in the Escort, as well as driers of the Ford F-150 and Toyota Prius, received minor injuries. They were treated and released at Pomerado and Palomar Hospitals.

An investigation continues, the Sheriff’s office has indicated.