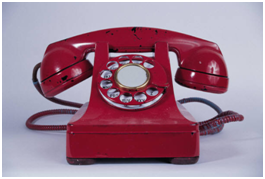 April 4, 2014 (San Diego’s East County) --Many citizens are not aware that AT&T and Verizon, among other telecom giants, are lobbying the Federal Communications Commission (FCC) and individual states to make telephone landlines go the way of the buggy whip. Soon, everyone in the U.S. may only have options for internet-based telephone service and cell service.

At the Boulevard Planning Group meeting held on April 3, local resident Kevin Keane, an IT and Telecommunications professional, discussed the issue with local residents, who were unaware these plans are in the works.

According to Keane, by they year 2020, landlines will no longer exist in California and likely elsewhere in the U.S. Other states are on an even faster track, such a Michigan, which will cease offering landlines by 2017.

For people living within the San Diego city limits and its suburbs, this is  less of a concern. In fact, many people with Cox, Time Warner and AT&T “bundles” – i.e., bundled phone service, cable television programming and Internet plans – are already off the “landline grid”, but might not know it. Those bundles provide phone service through and IP network, not old fashioned copper telephone wires.

That said, some of these systems failed during the major blackout a couple of years ago. So did cellphones.  But old-fashioned land lines have typically worked reliably even when the power goes off.

However, for many backcountry communities in East County, the thought of landline elimination is currently of grave concern. Simply put, wireless phone signals just don’t work in parts of communities such as Boulevard, Potrero, Jamul, Descanso and other areas. The technology required to eliminate landlines has not caught up with rural America. This violates the FCC’s mission of universal access for all U.S. citizens.  Of utmost concern is safety. 911 calls from a cell phone or wireless phone are not as accurate as they are from a landline.

Kim Hamilton, who produces the Antler Alert, a local publication for Deerhorn Valley residents, said she received numerous complaints from area residents who were sold wireless home phones. They confirmed to her that they had problems with reception, and most troubling, that they could not dial 911 in the case of an emergency.

“It was brought to my attention when a neighbor couldn't call 911 to report smoke the morning of the barn fire at Circle J Ranch,” said Hamilton. “It could be a death sentence for someone out here. Wireless doesn't give 911 your location, unlike landlines, so medical calls could be delayed if the individual can't give the address.” The barn burned down; several animals were also killed in the blaze.

Hamilton said some of these local residents being assured that wireless service would work regardless of their spotty reception. She said she was concerned that salespeople for many of the providers were not being up front about how current technology does not work in certain rural areas.

If the telephone providers have their way, which advocates claim is inevitable, copper wire phone service will be history.

But the elimination of landlines will require FCC approval. Technology will surely catch up in the backcountry rural communities of East County and other parts of the U.S. as communications towers are built, but at what cost?

The U.S. Department of the Interior has warned about the threat of communication towers to birds (http://emfsafetynetwork.org/us-department-of-the-interior-warns-communication-towers-threaten-birds/). They are calling for an environmental review and state that 241 bird species are at risk, specifically due to cell phone towers.

Besides birds, the dwindling population of bees due to colony collapse and bats are troubling (http://www.kompetenzinitiative.net/assets/ki_beesbirdsandmankind_print.pdf). Albert Einstein was quoted as saying “If the bee disappeared off the surface of the globe then man would only have four years of life left. No more bees, no more pollination, no more plants, no more animals, no more man.”

Residents in attendance at the Boulevard Planning Group meeting provided anecdotal stories of the loss of bees, birds and bats on the properties, especially over the past five years since large-scale electromagnetic pollution has been introduced with wind turbine projects.

Electromagnetic radiation also has significant impacts on human beings. According to the BioInitiative 2012, there is evidence “ that such exposures damage DNA, interfere with DNA repair, evidence of toxicity to the human genome (genes), more worrisome effects on the nervous system (neurology) and more and better studies on the effects of mobile phone base stations (wireless antenna facilities or cell towers) that report lower RFR levels over time can result in adverse health impacts,” (http://www.bioinitiative.org/).

The Boulevard Planning Group voted to authorize a letter to be drafted voicing their concerns. It would be directed to the FCC, with a copy to Congressman Juan Vargas.

Residents of East County communities are encouraged to write to their Congressional members as well.   You can find contact information for all local Congressional representatives and California’s two Senators at East County Magazine’s Citizens Action Center here:  http://www.eastcountymagazine.org/0809soundoff.