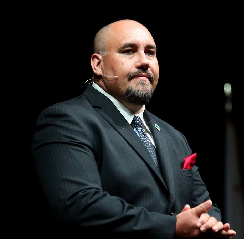 January 1, 2019 (San Diego) – Temecula Mayor Matt Rahn has filed papers to run against Congressman Duncan Hunter, a fellow Republican, in 2020, the Valley News reports. A scientist and land use consultant with background in ecology and sustainability, Rahn has represented San Diego State University  and the Pechanga tribe in their battle against the proposed Liberty Quarry, the Riverside Press Enterprise reported.

Rahn has said he formed an “exploratory committee”  while awaiting the outcome of indicted Rep. Hunter’s September trial on federal corruption charges. Hunter is accused of diverting $250,000 in campaign funds for lavish personal expenses including vacations to Europe and Hawaii, jewelry, dental work and his children’s private school tuition.  If convicted on felony counts, he could be removed from Congress and a special election held. If exonerated by the court, he could run for reelection.

Hunter came within 3.5 percentage points of losing his re-election in November 2018 to Democratic challenger Ammar Campa-Najjar, who has not yet decided whether he will run again in 2020 or a special election, whichever comes first.

Rahn says that if there is a “shift” within the district, “I think it’s important that we have the right kind of representation and I think a balanced representation.” He told the Valley News he was disappointed in the tone of the recent election, in which Hunter’s attack ads on Campa-Najjar were debunked by national media as false and racist.  “The name-calling, the rhetoric—we’re better than that,” Rahm says, adding that he wants to see a campaign focused on issues and the candidates voting records or views.

He says that “quality of life” is what matters to the region’s voters.  “Your ability to drive o and from work safely and efficiently, the response times and public safety and our ability to keep our communities safe,” adding, “You don’t hear a lot about that from the Congressional side.”

He holds bachelor’s and master’s degrees in biology from the University of Nevada.  After moving to Califiornia in 2000, he attended the University of California, Davis, and SDSU, obtaining a Ph.D. in a joint doctoral program in ecology and conservation, according to his bio on the California State University website. He is currently pursuing a juris doctorate degree in law at the University of San Diego, with emphasis in environmental law and planning.

He has worked on ecology and conservation projects throughout the western United States and also founded his own consulting company. His clients have included the San Diego County Water Authority, Agua Caliente Band of Cahuilla Indiams, Caltrans, and CalFire firefighters. He is on the board of directors of the San Diego Regional Sustainability Partnership and is director/vice president of the Elsinore-Murietta-Anza Resource Conservation District.

Rahn first ran for the Temecula City Council in 2014 and in his most recent election in 2018 was endorsed by the Riverside County Republicans  for the ostensibly nonpartisan mayoral race.

In February 2018, the California Department of Consumer Affairs’ new Cannabis Advisory Committee appointed Rahn as its Chair, the Valley Business Journal reported. Rahn stated, “I look forward to discussing issues such as public safety and education with my Committee colleagues to help guide the development of statewide cannabis regulations.”

On the Temecula Council, he has focused on maintaining a “business-friendly” environment to attract new businesses and help existing businesses thrive while maintaining parks and recreation, improving transportation, and preserving the city’s historic character. He touts “fiscal responsibility” in budgeting and building infrastructure for sustainable growth. He has also worked on a task force pushing state and federal governments to help ease traffic on Interstate15 through Temecula. In his January 2018 state of the city address (view video), he also emphasized the importance of preserving the region’s quality of life for future generations.