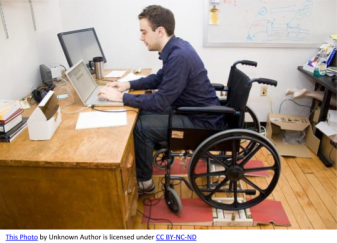 The national disability employment rate has only risen to 37.6 percent compared to 37 percent last year.

Why do some states succeed while others fail to capitalize on the talents of employees with disabilities?

While the health and growth of the national economy is critical, having the right policies and practices in place at the state level is critical.

Reducing that gap in employment outcomes requires that states have clear goals in place and that state leaders are held accountable for their efforts.

Florida is another success story where clear goals and interagency cooperation have resulted in thousands of new jobs. Fully 9,802 Floridians with disabilities got new jobs this past year, and they have consistently had some of the biggest job gains among workers with disabilities each year. The reason why? Florida’s efforts are coordinated by the Florida Agency for People with Disabilities (APD). APD is a major state agency with written agreements in place, specific goals for each agency and the results speak for themselves.

RespectAbility President Jennifer Laszlo Mizrahi has a clear vision of what it will take to get more states to succeed: “Persistence and accountability are crucial to close the gap in labor force participation rates between people with and without disabilities.”

Achieving that goal will require state leaders to revisit some of the pioneering work in the recent past to get more people with disabilities into the workforce. In 2012, the National Governors Association harnessed the collective attention of America’s governors on the Better Bottom Line initiative in 2016. The Council of State Governments’ collaborated to create the Work Matters framework for states workforce development solutions for people with disabilities. This led to big subsequent job gains.

Mizrahi argues that “getting more people with disabilities into the workforce cannot just be a one-and-done, single year commitment that ends as soon as a report is published.” She went on to say that “positive impact requires continued focus and attention by the states.”

The success or failure to get more and more people with disabilities integrated into the workforce impacts thousands of communities and millions of families nationwide. According to the Census Bureau, there are more than 56 million Americans living with a disability. Disabilities include visible conditions such as spinal cord injuries, visual impairments or hearing loss and non visible disabilities such as learning disabilities, mental health or autism.

Disability issues are poised to get greater national attention as the year gets closer and close to the presidential election in November. Research conducted in the 2018 election shows that 74 percent of likely voters either have a disability themselves or have a family member or a close friend with disabilities.

To earn those votes, many of the Democratic presidential candidates have brought special attention to disability issues by public releasing comprehensive disability plans and speaking publicly about what they would do if elected. You can read more about those plans and see which candidates have made disability part of their platforms here: https://therespectabilityreport.org/2020/01/22/2020-disability-voter-guide.