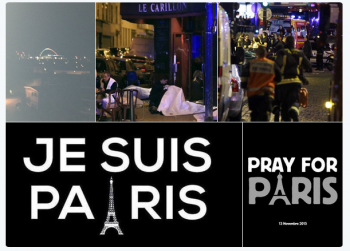 Updated 11 p.m. with State Dept. contact nunbers for those seeking to locate loved ones in France, along with a link to 24 hour live English-language coverage from France.

French President Francoise Hollande was evacuated from the Stade de France, the national stadium during a soccer match after explosions erupted outside, Reuters reported.  Calling the attacks “horrific” and of an “unprecedented scale,” Hollande ordered borders sealed and said his government has “mobilized all the forces we can muster to neutralize the threats and secure the region.”

“This is an attack not just on Paris, not just on the people of France, but an attack on all humanity and the universal values we shares,” President Barack Obama said at the White House, CNN reports.

The attacks are being treated as acts of terrorist and were apparently coordinated. Though no group has claimed responsibility, celebratory messages have been posted on Twitter by members of the Islamic State or ISIS.  France has been a major partner with the U.S. in the military offensive waged against ISIS extremists in Iraq and Syria.

Two or more explosions near the stadium have killed an estimated 35 people, where suicide bombers were also found dead, FTI television reports.

Concert-goers were taken hostage inside the Bataclan music hall in central Paris, where the American band Eagles of Death Metal were playing a concert. The San Diego Union-Tribune reports that the band is from Palm Desert, California. Band members reportedly escaped, the mother of one musician has indicated on social media, though the band's Facebook page says they are still trying to determine the safety of all band and crew members.  But witnesses inside the concert hall have texted that militants were executing hostages.  French media now reports at least 100 people dead at the music hall.

A Cambodian restaurant also came under attack with shots fired at diners through the windows, causing multiple casualties. There are also reports of shosotings at the Les Halles shopping mall and in the rue de Charonne area of the city.

Former Vice President Al Gore cancelled a climate change telethon broadcast from the Eiffel Tower about 4 hours into the 24 hour program that included musicians Elton John and Bon Jovi, instead putting up a screen that reads "The world is watching."

President Hollande has urged citizens to stay indoors and French residents have taken to social media to offer shelter to those who need safe havens.  On the hashtag #jesuisparis, people around the world have posted messages of sympathy and solidarity for the people of Paris.

The attacks are apt to fuel anti-Islamic immigrant sentiments in Europe, where a flood of Syrian refugees fleeing ISIS have innundated European countries. Some Europeans have expressed fears that terrorists could masquerade as refugees in order to enter European countries and plot acts of terror.  It is not yet known whether the attacks in Paris were waged by immigrants or citizens. The U.S. has recently announced plans to raise its cap on refugees from Syria, a decision that may come under increased scrutiny after today's massive, calculated atttacks in Paris.

Here in the U.S., CNN reports that counterterrorism officials around the nation have convened secure conference calls to assess whether there is any indication ,of threats in the U.S.

President Obama has pledged, “We’re going to do whatever it takes to work with the French people and with nations around the world to bring these terrorists to justice and to go after any terrorist networks that go after our people.” Nothing that France is America’s “oldest ally” and a valued counterrorism partner, Obama added, “Those who think that they can terrorize the people of France o the values that they stand for are wrong.  The American people draw strength from the French people’s commitment to life, liberty and pursuit of happiness.”

President Hollande vowed not to give in to fear, as the terrorists hope.  He concluded, "Long live France; long live the republic."

The State Department has issued telephone numbers for those seeking assistance or looking for loved ones in Paris. Those concerned about a U.S. citizen in Paris can call 1-888-407-4747 (in US) or 202-501-4444 (overseas) for assistance & follow @TravelGov.

The United States Consulate in Paris has also issued guidance for American citizens in Paris, and this email address for those seeking assistance: ParisEmergencyUSC@state.gov.

Obama wants to resettle large numbers of Syrian refugees into the U.S.