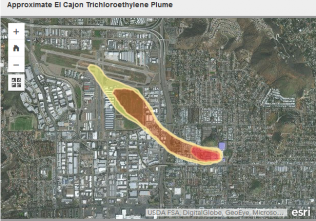 May 6, 2017 (El Cajon) - New air testing shows that vapors from a dangerous chemical that runs underground have seeped into homes in El Cajon.  Some people have breathed the toxic fumes for years or even decades, KPBS' inewsource reported.

Nineteen houses in the Starlight Mobile Home Park and Greenfield Mobile Home Estates were offered the testing four days after inewsource reported the vapors underneath their community and 18 days after the Department of Toxic Substances Control issued a Prop 65 hazard warning.

This was the first time anyone has assessed the air inside homes in the 30 years since the contamination was discovered.  Magnolia Elementary School, which is nearby, closed temporarily due to the issue and is protected by monitoring wells.

The gas is trichloroethylene, or TCE, a chemical mostly used for cleaning and degreasing.  TCE is most linked to kidney cancer, but can also cause liver cancer or malignant lymphoma, according to John Budroe, senior toxicologist with the state environmental health agency.  It harms babies in utero and can lower men’s hormone levels, sex drive and sperm quality,

ERM, a contractor for Ametek Inc., tested 18 of 45 homes that sit directly on top of the plume.  One home tested far above the level that calls for immediate action by EPA standards.  Three others tested "above the accelerated response action level."  Two had issues in the crawlspaces.  Eight had low levels of the gas, while two more had a bit higher level.  Results of two more homes have yet to come in.

“Nobody knows the effects of living over a house that has the minimum or acceptable amount of TCE seeping up into the air for 30 years,” said Ron Cox, a resident of a third affected area, Villa Cajon Mobile Estates, who is suing Ametek and Senior Operations, the company currently working on the site. Cox's mother died of kidney cancer, while his brother is in hospice for a brain tumor.

“They failed to let me or my family know this is happening and this could affect their health, why haven’t they fixed it, why didn’t the notify they public?” he asked.

Dr. Mary McDaniel, an environmental medicine physician consulting with Ametek, said the homes hadn't been tested because years of testing levels at Magnolia Elementary indicated that the levels were safe.  Company officials and state officials with the San Diego Regional Water Quality Control Board and Department of Toxic Substances Control believed that the levels in homes would be even lower.

McDaniel was "surprised" that the gas was found in homes.  Ametek had air purifiers installed immediately in two homes.

John Fiske, Cox's attorney, had a different story.  “Ametek and its top executive ignored notices of violation and abatement from the water board. The water board tried for ten years to get Ametek to clean this up and they refused to do it.”

The plume may originate from at least seven places where chemical waste was thrown in pits or "sumps," said Sean McClain, an engineering geologist who has worked on the site for the Regional Water Quality Control Board.

The chemicals flow through rocks into groundwater under the mobile home parks beneath Highway 67 and Gillespie Field.