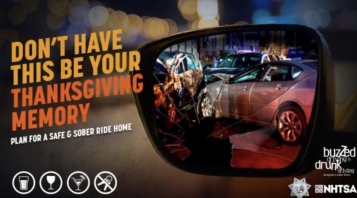 November 23, 2022 (San Diego) - Thanksgiving is one of the busiest travel times of the year with millions of people hitting the road to get to their holiday destinations.

The San Diego County Sheriff’s Department wants everyone to have a safe Thanksgiving by reminding you not to drive under the influence of alcohol or drugs.

From Wednesday, November 23 through Sunday, November 27, deputies will be conducting increased impaired driving patrols. The goal: to get people driving under the influence off our roadways.

So far in 2022, Sheriff's Deputies have arrested more than 750 people for impaired driving in San Diego County.

The Sheriff's Department has these tips for a safe Thanksgiving holiday:

• Plan a safe way home
• Before drinking, designate a sober driver and leave your car keys at home
• If you are impaired, use a taxi, ride-sharing service, call a sober friend or family member or use public transportation

Watch a video on the high price of impaired driving by clicking on the above photo or this link. An impaired driving arrest and conviction can cost more than $15,000 in legal and court fees.

Funding for the Thanksgiving impaired driving enforcement program was provided by a grant from the California Office of Traffic Safety (OTS) through the National Highway Traffic Safety Administration (NHTSA).