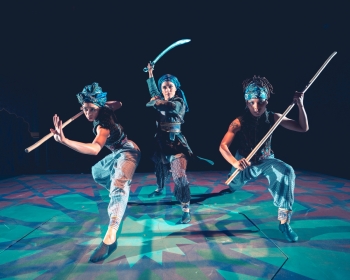 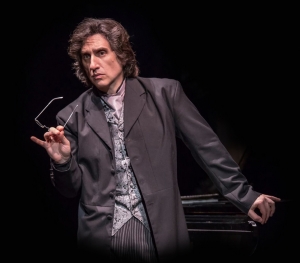 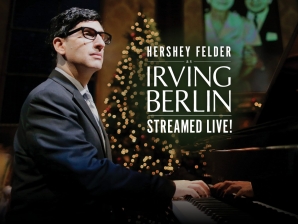 Photo, left:  Hershey Felder as Irving Berling streamed live via San Diego Repertory Theatre, courtesy of San Diego Repertory Theatre via Zoom productions
But Lamplighters has a plan, even as the COVID-19 pandemic surges in California. The theater, which was forced to close its doors like community and professional theaters around the county and around the nation, has picked a season that includes a production of Ron Hutchinson’s “Moonlight and Magnolias” and A.R. Gurney’s “The Cocktail Hour.” In preparation, “We have a very serious point-by-point plan to keep our theater safe based on some of the county’s guidelines,” said Ericson. “It’s ready to implement.” 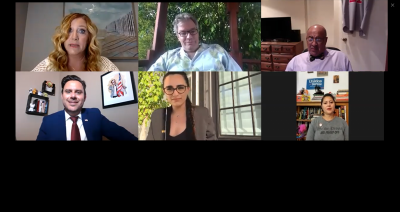 Photo, right:  Beachtown Live in rehearsal, courtesy of San Diego Repertory Theatre, courtesy of San Diego Repertory Theatre via Zoom productions
Ready, but waiting. The reality for Lamplighters and all theaters is that it may be well into 2021 before it’s considered safe to stage live shows in an indoor space, and even when that happens the general consensus is that theater houses will have to be refigured to maintain social distancing. “At six feet (recommended for social distancing), I can’t even get 25 percent” of a full house, Ericson lamented. 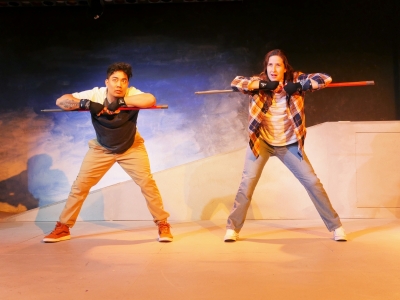 Photo, left:  Moxie Theatre’s live production of Red Bike prior to the pandemic, by  Daren Scott, courtesy of Moxie Theatre
For now, however, Lamplighters is focused on its financial survival. “As a small theater, this is really tough,” he said. “We’re depending on the generosity of our landlord. How long he’s going to be willing to do that, we don’t know.”
Relying on the generosity of its donors is Community Actors Theatre (C.A.T.) in San Diego, where Executive Director Jennie L. Hamilton acknowledged, “We have nothing else coming in.” Hamilton says the community theater is not in danger of losing its 54th Street space, “but it’s a big struggle.” 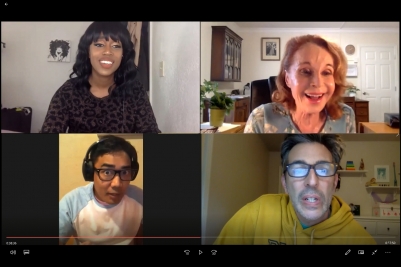 Photo, right:  Moxie Theater’s first ZoomFest production Safe Distance, starring Andréa Agusto, Jill Drexler, Timothy L. Cabal and Matthew Salazar Thompson, courtesy of Moxie Theatre
Like Lamplighters, C.A.T. does have its sights set on a future production, Oscar Wilde’s classic comedy of manners, “The Importance of Being Earnest.”
“We recently started rehearsing on Zoom so that we’ll have a play ready” for when the theater can reopen, said Hamilton, “and we’ll do the blocking (the physical staging of actors) in the theater when we open back up.”
The dynamics of making theater (or not making it) in the time of the COVID-19 crisis are a bit different for professional companies, like Moxie Theatre. It qualified for PPP (Paycheck Protection Program) loan forgiveness from the Small Business Administration and has set aside a small disaster-relief loan in the event a shutdown lasts longer than expected. 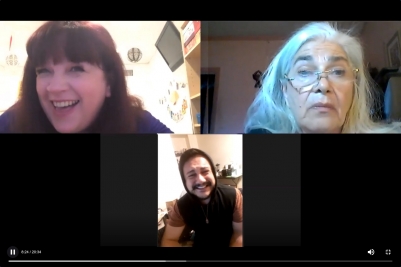 Photo, left:  Zoom Mediation in Pandemic Times starring Melissa Fernandez, Rhona Gold and Markuz Rodriguez, photo courtesy of Moxie Theatre.
In the meantime, Moxie has been producing original Zoom theater mini-productions and streaming them free while asking viewers for donations. (Most recently it collaborated with Common Ground Theatre on a presentation of four new short plays.) “I feel committed to making sure we feel like we’re an asset in the lives of people who’ve been so supportive of us,” said Moxie Executive Artistic Director Jennifer Eve Thorn. “I do feel grateful to be able to make work that our audiences want to watch, even though it’s different.”
Thorn called Moxie’s biggest challenge “trying to move ahead with that ‘show must go on’ attitude when we can’t control whether we can be in person.”
Owing to support of its longstanding donors and to the “trickle of income” generated by its Zoomed productions, Moxie is “Ok right now,” Thorn said, “but as I look ahead over the next year, it’s clear to me that the moment when we can reopen and we’re paying for shows will cost more than they ever did (because of restructuring of the company’s Oak Park space). That’s when we’re going to start to struggle.”
The even-larger San Diego Repertory Theatre has, like Moxie, continued to program, though virtually, during the COVID-19 shutdown. “I felt it was incumbent upon us to continue to make theater art, that our immediate future shouldn’t just be a world of ‘We’re sorry, we can’t perform,” said Rep Artistic Director Sam Woodhouse. “If we were going to maintain an artistic presence in the community beyond rebroadcasting shows from the past, we had to be making new art and the medium was going to be electronic.”
The Rep’s programming since March has included Instagram Live interviews with artists, familiar actors recording their favorite monologues or speeches, and even a virtual resurrection of the 2018 audience-interactive production “Beachtown” titled “Beachtown Live!” Coming up in September is a streaming version of the theater’s annual Latinx New Play Festival.
“Usually we spend a year working on one production,” said Woodhouse. “Now we’re doing it in a matter of weeks. In any case, we’re trying to stay present and immediate and in the moment.”
For financial support, Woodhouse said, “We have a forgivable loan through the CARES program (which integrated the PPP funding) and we have had strong support from donors. Many people have sent a second gift or doubled or tripled their usual gift,” he adds.
“We’re absolutely dependent upon the generosity of our donors and the ongoing support of subscribers. We’re not about to ‘close our doors” because I can’t open them (the actual theater doors).”
Looking toward a future after COVID-19, Moxie’s Thorn is concerned – for all theaters – that they may not be seen as priorities when more comprehensive reopenings are permitted. “I think,” she said, “it is far less important or prudent to be drinking in a bar than to be socially distanced in masks watching a piece of theater.”
Thorn concluded, “Theater people are socially conscious, the first people to strap on a mask and do their part to stay socially distanced. It’s something we do naturally. I hope that city officials will think about what is valuable and what we should think about doing safely together again.” 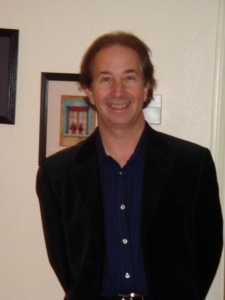 David Coddon is a longtime arts and entertainment journalist specializing in theater coverage. The former editor of the San Diego Union-Tribune’s Night&Day section, he is today the UT’s Arts & Culture Newsletter writer, and also contributes both entertainment and feature stories to a number of other Southern California publications. In addition, he is the author of three novels and co-host of a national podcast, “The Best Version With Dave and Dex.”