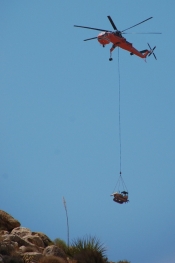 The CPUC found that SDG&E fulfilled requirements for remedial actions including a safety stand down, rigging training, necessity of helicopter operations vs. ground transportation, and incident reporting procedures.

A stop work order issued September 27 had indicated that if helicopter operations were resumed, SDG&E would be limited to flying helicopters only in areas not accessible by roads (with the exception of installing towers and line rigging). It is unclear from today’s letter whether that restriction has been applied and CPUC spokesperson Terrie Prosper has not responded to an ECM inquiry as of tonight.

During the brief respite from helicopter flights, East County residents living along the construction line had posted messages on Facebook commenting on the peace and quiet.  Numerous residents have filed complaints with the FAA alleging that the helicopters were flying too closer over homes and in some cases, carrying suspended loans over residences in violation of federal laws--allegations that the CPUC did not reference in its stop work order.