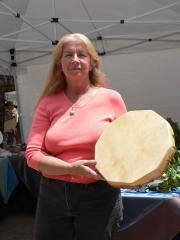 “I had a dream that I would have a drum,” recalled Neka’asawe, a drum maker who was among the many vendors displaying indigenous crafts at the Sage & Songbirds Festival at Viejas Outlet Center in early May. “I went into a sweat lodge and prayed. A spirit told me I would make many drums.”

Although she had no experience, Neka'asawe said she soon began crafting the Native American instruments using elk, deer, buffalo, moose, horse and steer hides stretched over a pine wood frame with a intricate, spiderweb-like lacing beneath. Sizes range from drums small enough to hang in a car up to her largest creation, a 68 ½ inch stretched drum that now hangs in a temple near Macchu Picchu in Peru.

Neka’asawe found her calling after surviving a near-death experience--and finding inner peace. Today, the Alpine resident is an ordained minister and spiritual advisor who travels throughout the United States. “I go into the prison system,” she said. “I pour water in sweat lodges. I help in sweat lodges with women, and I have been to death row with two prisoners.”

Jack Reeder of Descanso walked into a crafts store in Reno and was captivated by a haunting sound and an “amazing rhythm” from a didgeridoo, an Australian aboriginal musical instrument that literally translates as “magical stick.”

He started his own company, Lazy Kangaroo, hand-crafting didgeridoos using a variety of materials. “With little yuccas, I can do three in a weekend. With some hardwoods, it’s three weeks in the doing,” said Reeder, who sells his instruments for $85 to $1,000. (Watch a video of Reeder playing the didgeridoo at: http://www.youtube.com/watch?v=mT4NmClQ_Qo. See his handiwork at www.didgeridoostore.com)

Visitors at the Viejas Outlet Center during the Sage & Songbirds Festival stopped in their tracks upon hearing the deeply resonant strains emanating from a massive didgeridoo played by Reeder.

How tough is it to sell an aboriginal instrument measuring several feet in length to people here in the U.S.?

Reeder chuckles, then replies, “I can’t make them fast enough.”

I' am very interested in contacting or being contacted by Neka'asane. The drum maker and water pourer who helps women in prisons. I read your article on her via the web, would it be possible to contact her?
I'am of Native blood and live here in Jacumba.
Darcy J. Sessions, "Flying Butterfly"
PO Box 1172
Boulevard, CA 91902
619-766-9165.

Thank you for your consideration,
Darcy Flying Butterfly