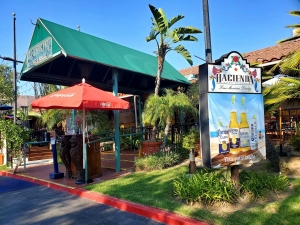 Sept.2, 2020 (El Cajon) These were the worst of times and the worst of times, to repurpose author Charles Dicken’s classic phrase. After first suffering closure due to COVID-19,  Hacienda Casa Blanca Restaurant & Cantina in El Cajon moved outdoors into a parking lot as well as on the patio. But soon, they faced yet another setback—theft of their outdoor tents, tables and chairs.

Cindy Gomez and her husband, Tony, run the business. Cindy Gomez says the thefts occurred on two separate occasions, the first around three weeks ago, and the second about a week later.

In the first theft, security cameras revealed “two men, who appeared to be homeless men, removing the tents, one umbrella that was left outside by mistake, and a chair,” Gomez told ECM in an e-mailed response to questions.

Fortunately, she reports that after the second theft, “We recovered our items stolen: a table, umbrella, highchair, a plant, and chair. The items were recovered in front of the Social Security office. This instance was also on our cameras and was taken by a man. He put the table on his back and then returned with a truck for the rest. He jumped our patio railing for the high-chair and an adult chair.” 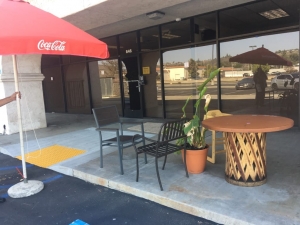 The restaurant’s owners had borrowed the tents from friends to provide more shade than umbrella tables in the parking lot.  So the theft “was hard to handle with the frustrations that we are already struggling with, Gomez told ECM. “We had to buy three replacement tents, which were hard to find and costly.”

Gomez said she is not aware of any other East County restaurants that have had outdoor dining items stolen. She added, “I have been asked why we don't have security. Simply, our landlord considers everything to be CAM charges (community, complex charges) so we would have to pay for it. It's difficult to payout more than what is being brought in.”

Even with the new tents, Gomez voiced concerns that challenges may continue.  “The homeless situation is increasing and until we can handle that, I fear that this will be an ongoing problem for us,” she concluded.

Since this interview, new state rules have allowed Hacienda Casa Blanca to reopen indoor dining at 25 percent capacity, as well as maintaining some outdoor dining options.