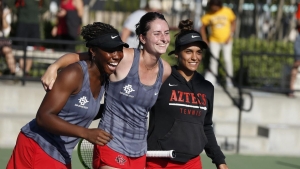 SDSU advances to semi-final round for first time since 2014

April 25, 2019 (San Diego) - Third-seeded San Diego State pulled off a 4-2 thriller over sixth-seeded Colorado State in Thursday’s Mountain West Championship quarterfinals to move on to the semifinal round for the first time since 2014. The Aztecs clinched the doubles point in two, and held on through a Rams comeback in singles play to clinch the decision.

“I thought we put up a really good fight today against a very solid Colorado State team that came to play,” head coach Peter Mattera said. “At the end of the day, we survived because college tennis is, in fact, a team sport, and we live to fight another day. Tomorrow, we’re looking forward to a good challenge here at home against the Air Force Academy.”

In doubles action, San Diego State’s all-conference duo of Nnena Nadozie and Alicia Melosch tallied their 10th win as a pair in the top-seeded match against Emily Kolbow and Stella Cliffe with a score of 6-2. Senior Jenny Moinard and junior Mia Smith finished off Riley Reeves and Nancy Ghanem 6-2 from the second position to clinch the first point of the day for the Aztecs.

Singles action started hot for the Scarlet and Black as all-conference singles honoree Nadozie swept Ghanem in the third position with an incredible 6-0, 6-0 decision, but senior Magda Aubets faced a tough loss to CSU’s Priscilla Palermo 6-2, 6-2 to give the Rams their first point of the afternoon.

In the top-seeded matchup, MW Freshman of the Year Shakhnoza Khatamova showed great fight and came away with a 6-4, 6-4 victory over Emily Luetschwager. The Rams continued to fight for a comeback in the remaining matches and ultimately snagged their final point of the day with Kolbow’s 3-6, 6-2, 6-3 decision over Melosch from the No. 5 position.

Thursday’s quarterfinal clinch came from an impressive bounce-back performance by Moinard, who dropped her first set to Cliffe in the second seed but came back to claim the point 3-6, 6-4, 6-2.

The Aztecs advance to the semifinal round of the Mountain West Championship for the first time since 2014, when the then-third-seeded Aztecs downed sixth seed San Jose State 4-2.

San Diego State (14-9, 3-1 MW) advances to the Mountain West Championship semifinal, where they will move on to face second-seeded Air Force in Friday’s 2 p.m. match at the Aztec Tennis Center. Friday’s semifinal matches will be streamed live on the Mountain West Network and live results will be available.