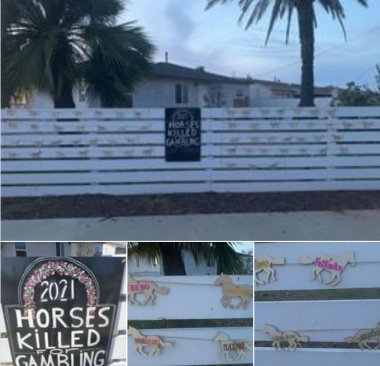 November 3, 2021 (San Diego) – California’s 2021 thoroughbred racing season is off to a deadly start.  So far, 62 racehorses have died, prompting animal rights advocates and the San Diego Democratic Party to call for a state constitutional amendment to ban gambling on horse racing.

Wagering on horse racing was legalized during the Depression in 1933, as a means of generating revenues for the state of California. The Del Mar race track in California opened four years later.

But now another proposed constitutional amendment would legalize betting on human sports, such as football.  The sports betting market in California has been estimated to be worth over $4 billion a month – more than horse racing brings in over an entire year.  Those seeking to ban betting on horse racing say that its revenues are no longer needed.

A petition on Change.org calls on state legislative leaders to pass the measure outlawing horse race wagering – the fastest way to put an initiative on the ballot for voters statewide.

“What other `sport’ has 54 deaths of its `athletes’ in just 10 months in only 5 venues in a single state, as reported by the CA Horse Racing Board?” the petition asks.  “What other `sport’ has at least 7,500 of its retired `athletes’ sent to slaughters in Mexico and Canada, as reported by the president of the National Thoroughbred Racing Association?”

Since the petition was launched, the death toll has climbed even higher, including the most recent death – a 2-year-old filly named “Set the Tone” at the Del Mar Thoroughbred Club – the sixth fatality at Del Mar this year. The filly was in training for the Breeder’s Cup when her rider fell off and the horse struck a pole, sustained a shoulder injury and was euthanized.

In the past week alone, two other horses died at Santa Anita Park, the deadliest track in the state with 20 racehorse fatalities.

Lori Saldaña, a former state legislator and member of the San Diego County Democratic Central Committee, says its time to end wagering on horse racing. “When we look at changes in attitudes towards types of animal sports, we don’t do dogfighting. We don’t do cockfighting. We don’t do bullfighting,” she said, ECM news partner 10 News reports.

State revenues from horse racing have dropped 18.5% since 2010.  Saldaña argues that state taxpayers should not be subsidizing horse racing at sites such as Del Mar, a state fairground, noting, “We end up having a cash flow problem as a result.”  She wants the problem addressed from an economic standpoint as well as from an animal cruelty perspective.

San Diego activist Martha Sullivan has long been calling for an end to horse racing or at least a ban on state-subsidized gambling on the deadly blood sport. This week, to commemorate Dia de los Muertos (Day of the Dead), Sullivan created her own display titled “Killed for Gambling 2021.” It includes cutouts of horses, each bearing the name of a racehorse that died in California this year.

California is not alone in seeking to rein in abuses of racehorses. The Washington Post  in March 2020 reflected on federal indictments in a racehorse doping scandal and the deaths of 10 racehorses a week nationwide – 520 a year.  The newspaper’s editorial board concluded that, “No other accepted sport exploits defenseless animals as gambling chips. No other accepted sport tolerates the cruelties that routinely result in the injury and death of these magnificent animals. The rot in horse racing goes deep. It is a sport that has outlived its time.”

The CA Horse Racing Board reported the death of a 2nd racehorse in Training on Wednesday, in addition to Set the Tone who died at Del Mar. “Storm Spun” is reported dead in Training at the San Luis Rey Training Center in North San Diego County, with no other information about the 3-yr-old unraced colt’s death. He is the 63rd horse Killed for Gambling in CA's 2021 racing season. http://chrb.ca.gov/racing_fatalities.aspx. Storm Spun has no “connections” listed in his Jockey Club profile (https://www.equibase.com/profiles/Results.cfm?type=Horse&refno=10432344&registry=T), but the CHRB lists Peter Miller as his Trainer in its Racehorse Fatalities List: http://chrb.ca.gov/racing_fatalities.aspx Storm Spun is the 4th horse trained by Peter Miller to die in Training this year at the San Luis Rey Training Center, and Miller also trained Fight On Ron who died Racingt at Santa Anita on October 1st as well as Ebeko, who died Racing at Santa Anita on December 27, 2020, the first weekend of the 2021 Racing Season. In all, Trainer Peter Miller has now had six horses die in his care so far in the 2021 Racing Season, as reported by the CHRB. Trainer Peter Miller has 11 horses entered in the Breeders Cup today and tomorrow: https://www.equibase.com/profiles/Results.cfm?type=People&searchType=T&eID=1257 Why is the “safest track in North America”, Del Mar, allowing this Trainer who has had 6 horses die in his care just here in California this racing season to continue entering horses to race? And why is the Breeders Cup permitting him to enter horses?