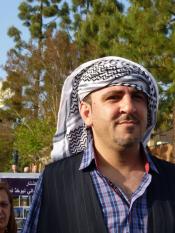 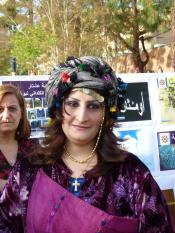 April 8, 2013 (El Cajon ) – In Babylon 7,313 years ago, Chaldea became the first nation to celebrate Akitu, a New Year Festival heralding the arrival of spring and the renewal of life.   Yesterday the tradition continued in El Cajon’s Prescott Promenade Park, where thousands of local Chaldeans turned out to celebrate the ancient tradition.   View a video: http://youtu.be/YfeKE22-wXw

“We are doing it to celebrate and have some fun with other, and to keep remembering,” Wissam Gello, a local Iraqi Chaldean told ECM.  “Our children will keep doing this every year, to remember and tell the truth.”

Wissam (photo, right, on the left) was celebrating with friends Flauna, Riza, Savmad and Ilham, some of whom asked that their last names not be published. 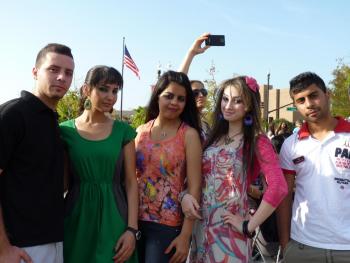 El Cajon is home to some 40,000 Iraqi Chaldeans, most of whom came here seeking refuge from their war-torn homeland.  Today’s Chaldeans are Christians; their religion is a form of Catholicism.  But the New Year Festival, known as Akitu, traces its roots back thousands of years before the time of Christ.  Held during the spring equinox, it marks the time when the days and nights are of equal length.

The Sumerian people of Southern Mesopotamia celebrated the festival of Zagmuk as their New Year, when seeds were planted in the spring. In the Chaldean Babylonian calendar, this first month of the year was known as Nisannu.   Chaldea was the first nation to celebrate Akitu in the year 5300 B.C.

During the 11-day festival, the story of creation, Enuma Elish, is read aloud. 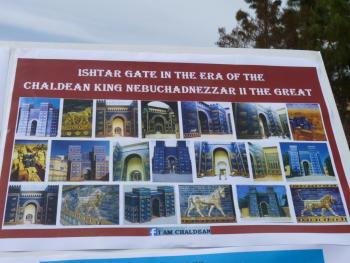 It tells of the order of the universe and how it was believed to be created out of a struggle between Mardukh, god of Heaven, and Tiamut, goddess of the Power of Chaos.  A king has his powers removed but later restored after he prays for forgiveness of his sins.   On the last day of the festival, a banquet is held to celebrate the restoration of order and renewal of life in the community.

The ceremonies in El Cajon were performed in the Aramaic language.  Live music and folkloric dancers in traditional costumes were featured, along with displays and information on the fascinating history of the Chaldeans, whose lineage includes King Nebuchadnezzar and whose cultural icons include the Gates of Ishtar and the Lion of Babylon. 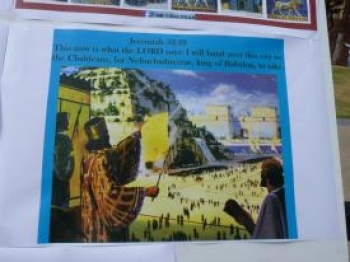 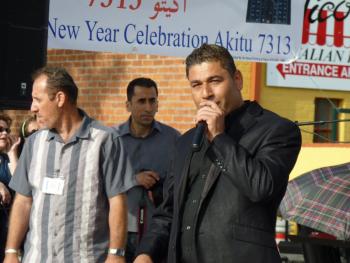