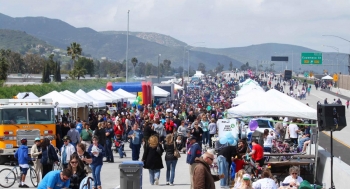 March 20, 2011 (Santee) – An estimated 20,000 people turned out to run, walk, bike and party atop the last link of Highway 52 at yesterday’s “Sea to Santee” celebration. Now open to traffic, the new freeway segment is the last link connecting Highway 67 in East County to Interstate 5 and La Jolla.

Transportation improvements have historically heralded changes in East County, starting with cattle drives and the coming of stagecoach and railway lines in the 19th century. Invention of the "horseless carriage" brought construction of Highways 94 and 80, connecting East County to San Diego and Arizona. The aviation era led to the airfield at Gillespie Field. More recently, construction of Interstate 8, Highway 67 and now Highway 52 further improved access to 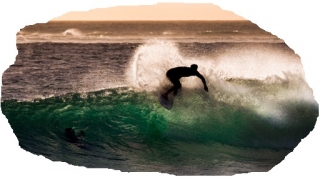 East County for visitors from around the county and across the nation.

The new highway will also make it faster for East County residents to reach San Diego destinations including employment and yes, beaches.  Surf's up, Santee! 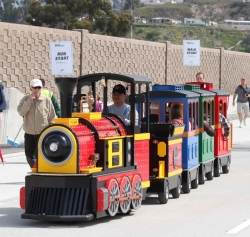 Free “SR 52 Sea to Santee” T-shirts were handed out to the first 3,500 participants at the free public festival. Following a ribbon cutting ceremony with state and local representatives and elected officials, people joined in a three-mile bike/run/walk across the new highway.

Kids enjoyed miniature train rides and climbing on fire trucks provided by the Santee Fire Department. A display of vintage automobiles from the Santee Car Club were also on display.  The event was co-sponsored by the San Diego Regional Association of Governments (SANDAG), CAL-TRANS, the City of Santee, and the Santee Chamber of Commerce.

Overhead, aircraft from Gillespie Field performed fly-over maneuvers, while visitors also enjoyed performances by clowns, gymnasts, and high school bands. Some 25-30 vendors were on hand for the festivities, joining thousands of area residents in marking the newest chapter in East County’s transportation history.