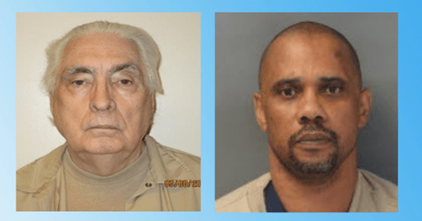 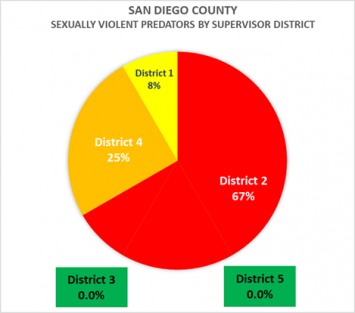 During an April 20 hearing before Superior Court Judge Theodore Weathers, Supervisor Joel Anderson testified that his East County District 2 has become “the dumping ground for the worst sexual offenders” while other districts “continue to get a pass.”  He provided a chart showing that 67% of SVPs released in San Diego County have been placed in District 2. (District 4 has 25%, District 1 has 8%, while Districts 3 and 5 have zero.)

According to the Grossmont Mount Helix Improvement Association, which has widely publicized the placements, Judge Weathers has been sent two petitions in opposition, one with 1,750 digital signatures and the other with 500 signatures. In addition, over 600 people sent emails, 100 left voice mails, and more than 400 people attended a rally on April 6 opposition Badger’s placement in their neighborhood.

Badger has been classified as a sexual sadist as well as an SVP  He has been convicted of crimes against nine young people including males and females. His crimes range from rape to sexual molestation to sexually assaulting hitchhikers at gunpoint. Wakefield has been convicted of lewd acts with a child under age 14, as well as a later felony rape conviction. Both men spent time in prisons and state hospitals before petitioning for supervised release and winning approval from the Dept of State Hospitals.

Over 40 people spoke at the hearing, all opposed to the proposal to have Badger, 78, released under supervision that would include GPS monitoring and accompaniment by a Liberty Healthcare staffer if he must leave the residence.

Liberty Healthcare regional coordinator Kym Caudle testified, “We are confident we can safely manage this person, both monitoring his supervision as well as treating him in the community.”  Badger’s attorney claimed he was unaware of any SVPs reoffending locally.

But Badger and Wakefield’s record of violent, predatory crimes has neighbors deeply concerned. Neighbor David Richards called the area a “family neighborhood” where dozens of children live within a few hundred feet of the home where Badger and Wakefield would live if released. On Facebook, Richards posted a photo showing the backs of dozens of children, hands joined, standing in front of the proposed release site.  “We had over 35 kids who live within walking distance of this house…show up to remind us all who we’re fighting for.” 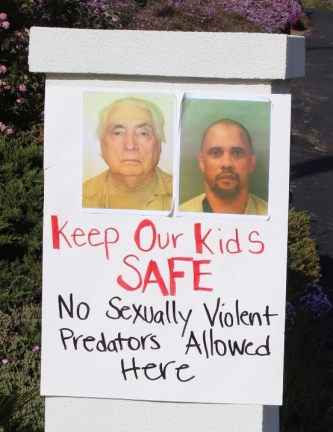 Others gave emotional testimony of past abuse of family members and the fear triggered by the proposed placement of sexually violent predators near their homes.

Theresa Kemper, Superintendent of the Grossmont Union High School District, said the proposed release site has three elementary schools and a high school within three miles.  She voiced her view that the placement would cause “grave consequences.”

Among the most compelling testimony came from Kathleen Hedberg, President of the Grossmont-Mount Helix Improvement Association. Hedberg asserted that laws have been violated and urged the judge to reject the placement because “the County did not designate a county agency or program to provide assistance in determining an appropriate location for Mr. Badger” as state law requires, and because Liberty Healthcare did not reach out to the community.

Second, Hedberg said the proposed placement also violates a state requirement to consider the “age and profile” of victims – all of whom were young, in Badger’s case.  “Proposed placement in a neighborhood with 89 children that live within 2000 feet of the property is in conflict with the victim age and profile requirements of the placement statute,” she noted, adding, “There are six schools and three parks within one mile of the house, with over 700 students at Fuerte Elementary school. There is a daycare located right across the street…”

Hedberg voiced support for a proposal made by State Senator Brian Jones in a letter to Governor Gavin Newsom. Jones asked the Governor to override the Dept. of State Hospitals decision and require that Badger be housed in a trailer at a state correctional facility, noting that two prior Governors have made similar decisions in the past.

Some neighbors have targeted the home’s owner, Giovanni  Spinali, voicing frustration at his seeming lack of consideration for their concerns over the safety of young people and potential impacts on property values. Some have contacted Spinali, his family members, and sponsors of his racing events to apply pressure on Spinali to withdraw his home from consideration for the placement, as is allowed by the Dept. of State Hospitals.

Some residents are also weighing legal action to prevent the community from having to mobilize over and over again to propose predator placements at the site. Carl Jerris posted in the Next Door forum, “The only way to stop this for good is to prepare for CIVIL action against Spinali.  If he does this for profit, we take that profit away…All of our property values are going to drop. We sue for damages….My wife and I are ready to contribute to a fund to proceed along this avenue should the judge not give us justice.”