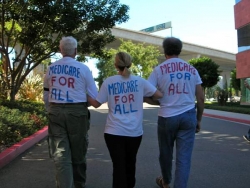 November 5, 2009 (San Diego) – Mary Bell, 25, cannot get health insurance anymore since overcoming a kidney infection two years ago. On Monday, Bell and two others (photo, left) were arrested following a three-day vigil at Blue Cross in San Diego. Blue Cross executives declined to meet with the protesters, who sought to ask the insurance giant to stop spending money on lobbying and political ads – and fund care of patients like Bell instead.

“I have had wonderful healthcare for the past 18 years,” said Jerry Malamud, who was also arrested, along with Bell and Carl Manaster. “I have Medicare. They replaced my two hips and also two cataracts,” he added, noting that he is pleased with the results. “It was all done very reasonably and I believe that this healthcare should be available to everyone in America.” 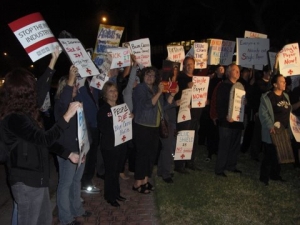 About 70 to 150 people participated in the San Diego protest, one of many planned around the nation to bring public pressure on insurance companies. Nationally, more than 120 people have been arrested for civil disobedience in protests against healthcare insurers. Bell, Manaster and Malamud received misdemeanor citations and were subsequently released.

The San Diego protest was part of the “Mobilization for Health for All” campaign. Founded in September, the organization was created by Center for the Working Poor, Healthcare - NOW! and Prosperity Agenda, supported by the Single Payer Action Coalition and members of Progressive Democrats of America. Locally, the group staged a 45-hour vigil – one hour for each of the 1,000 people in America who die each year due to lack of healthcare.