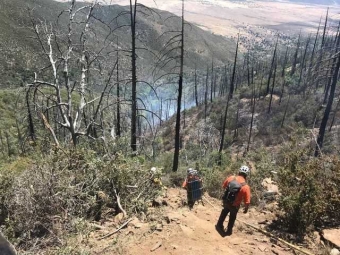 May 13, 2018 (El Cajon) – Three bodies have been found at the site of a plane that crashed Thursday night on Volcan Mountain near Ranchita. The crash sparked a brush fire that burned a dozen acres.

Although firefighters located the plane on Friday, Sheriff’s search and rescue crews were unable to reach the crash site until Sunday, after firefighters contained the brush fire 100 percent.

The bodies, which have not yet been identified, have not yet been removed due to high winds that have prevented a helicopter from landing in the steep, rugged terrain, says Lieutenant Greg Rylaarsdam with the Sheriff’s department.

The plane has not been identified, though searchers continue combing through the wreckage seeking a tail number or other identifying information.

However, a Beechcraft Duchess twin-engine plane owned by Scandinavian Aviation Academy at Gillespie Field went missing Thursday and never made it to the Ramona air field where it was reportedly heading.

According to 10 News, the same plane was involved in a hard landing at Gillespie Field in 2013.

Which require courtesy, respect and civil dialogue.  Likening others comments to "rat droppings" and insulting any readers by name is goingo to stop. Anyone is free to voice opinions on articles but not to demean others here.  It's not a matter of agreeing or not. It's a matter of common courtesy or basically the golden rule, do unto others as you would want others to do unto you.

So, my takeaway here then is that it is okay to repeatedly call commenters "TROLLS", but not to infer that the comments made by those name callers are useless? I thought my choice of worlds was rather benign, could have been much worse.

Standard procedure. Bash anybody who disagrees with a chosen few are labeled and insulted, must follow the party line.
Of course no story on the attorney general from new york who hates the President, but who resigned because he beats women and is a democrat, can't mention that
Of course no story 2 federal judges, one slamming the mueller witch hunt in court., the other ordering the mueller gang to hand over evidence.
Of course no story about the traitor mueller indicting a russian company that did not exist at the time he claims
Of course no story showing the broward county schools and sheriff and the criminals regarding the school shooting, NOT the NRA

So much for the news that doesn't fit a fantasy

You won't find any of those news stories here, it doesn't fit their narrative. I've complained about the lack of equal representation on this site previously as well, you can view some of our exchanges Here On the plus side, we're not the only ones to notice the deliberate bias of the articles published here either, even though the site claims to be "non-partisan" ya, right. The majority of the commenters, save for 2, are from others complaining about the same thing. It will eventually be their own undoing.

Super Bowl.  That didn't fit my fantasy of my Pats crushing them. :/

What's your problem besides being an ever obvious Internet TROLL? Seems like every time you post a comment here, you're just wanting a fight. Get a life!
The Last Poster tried to make this sound like we are all going to die from the sky! 7 Incidents in 2017.... I challenge grandpa to post the amount of deaths on the roads and highways last year, and then please explain your chicken little comment. It's in the hundreds...And those are deaths not just property damages.... those are well above the hundreds. SYM
Sad to hear about the loss of life. It's a good thing this plane crash didn't happen in the city causing damage, injury or death. I hear and see these small planes every day, which I presume quite a few are training flights. They go back and forth, often circling the city of El Cajon - over and over...