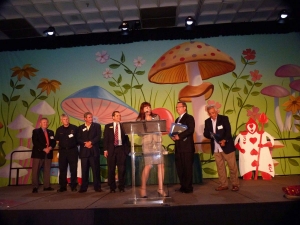 The victory was especially sweet for La Mesa, which last year received a Golden Fleece award for putting a sales tax increase measure on the ballot. That measure was approved by voters, however; Mayor Art Madrid has credited the half-cent sales tax rise with raising millions of dollars for the cash-strapped city and preventing a budget deficit when the state later raided redevelopment funds.

At this year’s awards ceremony, boisterous crowd cheered (and posted and tweeted) as recipients were announced and as elected officials bravely went for laughs at their own expense, all playing on this year’s program theme, “Taxpayers In Wonderland.”

This year’s Grand Golden Fleece Award was presented to the Tri‐City Hospital District for its “Trifecta of Troubles” including squabbles between board members and hospital executives, lawsuits, and bad budget decisions. Judges wrote, “We think some emergency surgery is needed, stat!”

The Metro Golden Fleece recipient is the City of Chula Vista, “Attack of the Taxasaurus,” for its repeated failed attempts to raise taxes on citizens, costing taxpayers hundreds of thousands of dollars, and for misleading voters in the process. Judges wrote, “The Taxasaurus threatens to take over the whole city. Calling Godzilla!” Also nominated were the City of Carlsbad, “Double Bogey for the Crossings,” and the San Miguel Fire Protection District, “Accident Crash Tax.”

The Regional Golden Fleece recipient is the San Diego Unified School District, for “Survey This! Governance Woes,” earned through a “series of nonsensical decisions” according to judges including a parcel tax slated for the November ballot on the heels of a $2.1 billion bond, plus a revolving door of superintendents. Runners‐up were the Metropolitan Transit System, “Ad Revenue Going Nowhere Fast,” and the San Diego County Employees Retirement Association, “Gold‐Plated Investment Officer.”

The “It’s About Time” winner is the City/County Managers Association, “Pension Reform Recovery.” Last summer, the Region’s City Managers issued recommendations to bring pension costs under control, including contributions by all employees to their pension plans, and adoption of a new, lower cost pension plan for new employees, saving taxpayers money. Judges commented, “This effort by the Association to address pension problems regionally is welcome, necessary, and long overdue.” Also nominated in this category, were the County of San Diego, “Project Green;” the County of San Diego Human Resources Department, “E‐Benefits Program,” and the Grossmont Union High School District, “Propositions U & H Bond Programs.”

The Metro Golden Watchdog winner goes to the City of Poway, “Lowering Poway’s Unfunded Pension Liability.” With increasing pension costs looming as a result of recent investment losses, the City of Poway had set aside money in a Pension Stabilization Fund to hedge against future cost increases. By paying down the City’s fire plan unfunded liability, the City will be saving its taxpayers approximately $330,000 per year in interest and principal paid to CalPERS.

Also named as a finalist was the City of Santee for “Citywide Pension Reform.” The Regional Golden Watchdog winner was presented to the County of San Diego, “New Medical Examiner's Office and Forensics Center.” The County of San Diego completed construction of a new state‐of‐the‐art facility in Kearny Mesa in 2009. The County actually set aside money for the facility and remitted full payment in cash, saving $140 million in financing costs. The project was completed on time and under budget, with additional project cost savings expected to be approximately $12 million. The facility uses the most current technology available, has an 80‐year life cycle, and is certified LEED Silver for its sustainable practices.

Also named in this category was the County of San Diego, “Once Upon a Partnership;” and the
Olivenhain Municipal Water District, “Holding the Line on Rate Increases.”

Full details on all the award nominees are posted at www.sdcta.org.

Recipients were announced at the Town and Country Resort & Convention Center in Mission Valley. Now in its 15th year, the Golden Watchdog & Golden Fleece Awards Dinner gives the public an opportunity to voice kudos and criticism of government spending through nomination of programs that highlight what SDCTA views as smart and not‐sosmart decisions of the past year. SDCTA receives dozens of nominations from individuals and organizations throughout San Diego County. SDCTA is a nonprofit, nonpartisan organization promoting cost-effective and accountable government and opposing what the group views as unnecessary new taxes and fees.

But there’s never any rest. Nominations are already open for the 16th Annual Golden
Watchdog and Golden Fleece Awards! Contact the San Diego County Taxpayers Association
at (619) 234‐6423 or email lani@sdcta.org.