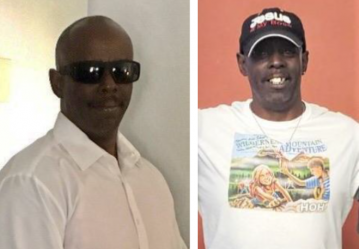 By Miriam Raftery
Photos: Kenneth Love II, victim killed in extortion scheme
July 14, 2021 (Spring Valley) – Three men are charged with murdering Kenneth Love II, a security guard who was shot and killed on June 2, 2020 at an illegal marijuana dispensary in the 8700 block of Troy Street in Spring Valley.
“The shooting was tied into a broader scheme to extort the illegal dispensaries for money,” states a press release from San Diego County District Attorney Summer Stephan, who announced the arrests yesterday. If the extortion money was not paid, the defendants used threats and violence to intimidate ownership, according to the D.A. The crime spree is responsible for other Spring Valley area shootings in July 2019 and November 2019.
After an exhaustive investigation by San Diego Sheriff's Homicide detectives and the FBI Violent Crimes Task Force, three defendants were arrested for Love's murder. Two additional defendants have also been charged in connection with the scheme to rob and extort money from illegal dispensaries.
Two of the defendants are gang members who reside in the Los Angeles area and the third is a San Diego man associated with a local gang.
“This case demonstrates how violent gang crime knows no borders and criminals will exploit any opportunity, such as marijuana dispensaries operating illegally, to make money,” said District Attorney Stephan. “Law enforcement never gave up on finding the murderers and our team will continue to seek justice for Mr. Love’s family and friends through this prosecution. Extraordinary cooperation among our investigative partners from several local, county and national agencies led to these arrests.”
Daveon Dajuan Hicks Sr., 30, Curry James Williams Jr., 29, and Jamal Johnson, 41, have all been charged with murder, conspiracy to commit extortion and other offenses related to the Spring Valley shootings. Adrian Kasey Batten, 36 was charged with conspiracy to commit extortion and other offenses related to the Spring Valley shootings. Jester Ramos, 28, has been charged with attempted robbery and shooting at an occupied building. All have pleaded not guilty and are due in court for a readiness hearing on July 14 at 8:30 a.m. in Department10 at the East County Courthouse.
On June 23, 2021 the victim’s loved ones joined community members, and Sheriff's personnel from Homicide and deputies and Senior Volunteer Patrol from the Rancho San Diego Station at the First Baptist Church of Spring Valley to hand out flyers asking people with information about the murder to come forward.
“I want to thank the Sheriff's Homicide Unit, as well as detectives with the Rancho San Diego Sheriff's Station, and the Violent Crimes Task Force for continuously working this case for more than a year to find answers in the murder of Kenneth Love,” said Sheriff William Gore. “ We are also grateful to the public for submitting tips when we made renewed calls for new information. This is an example of how law enforcement and community collaboration can hold criminals accountable for their actions.”
In the spring of 2021, the FBI's Violent Crimes Task Force joined the Sheriff's Homicide investigation and had a sizable contingent in Los Angeles for arrests that occurred on July 1.
“Last week’s arrests bring a conclusion to this chapter of an investigation by a group of dedicated law enforcement professionals committed to making the streets of San Diego safer for the community to live and work,” said FBI Special Agent in Charge Suzanne Turner. “This case involved a wide array of investigative techniques varying in their complexity, worked jointly with the San Diego County Sheriff’s Department, all with one goal in mind – to bring justice to Mr. Love and his family.”
On July 1,  five search warrants were served in Hawthorne, Bellflower, Long Beach, and two warrants were served in Compton. Five firearms were recovered during the execution of these search warrants and Hicks and Williams were arrested at their homes in Compton.
The arrests were made possible with continuing assistance of the FBI's Los Angeles's Field Office, Los Angeles Sheriff's Department, Los Angeles Police Department, Violent Crimes Task Force ,Long Beach Police Department, Torrance Police Department, and the Hawthorne Police Department. On July 7, 2021, Johnson and Batten were arrested by San Diego Sheriff's detectives after they landed at Los Angeles International Airport.
Later the same day, a San Diego County Sheriff's Special Enforcement Detail served a search warrant at Ramos' residence in the city of San Diego and arrested him there.
Anyone with information about this incident is asked to call the Sheriff's Homicide Unit at (858) 285-6330/after hours at (858) 565-5200. You can also remain anonymous by calling CrimeStoppers at (888) 580-8477.