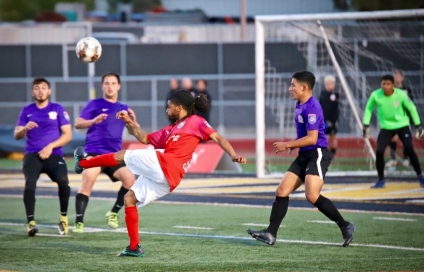 May 28, 2019 (San Diego) -  ASC San Diego continued their superb form with a shutout win Saturday, May 25th against Southwestern Conference opponents A.S. Los Angeles. The 3-0 victory bolstered ASC’s stats to 6 clean sheets on the season and a 6th win in their last 7 matches played. With just 4 matches remaining in the regular season, Saturday’s victory grants ASC 3 valuable points which pushes them further forward in their quest to see NPSL postseason play.

The home side saw a few more near misses before the break and headed into the lockers with a 1-0 lead. ASC San Diego shared the same intensity in the second half on both sides of the pitch.  A.S. Los Angeles found themselves with very few chances to make any real forward movement and even fewer shots on goal.

ASC team captain Kuba Waligorski was a nightmare for strikers in the back field and midfielder Ozzy Ramos was a dual threat having several scoring opportunities as well as shoring up the middle of the pitch.

The 55th minute saw goal number two for ASC as Mike Semenza used his position on the near post to receive a well taken corner and surprise the Los Angeles keeper putting it in the back of the net.

Semenza and ASC’s success in maintaining the tempo throughout the match frustrated their opponent causing them to have short fuse giving up many costly mistakes. In the 74th minute Elijah Rice was brought down in the box from a desperate ASLA defender for a clear penalty.  The skipper and PK specialist Kuba Waligorski made no mistake as he emphatically smashed the ball past the opposing keeper Claysson Lima. 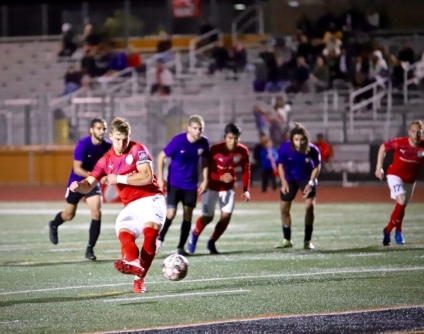 Their inability to keep composure resulted in A.S. Los Angeles being booked for 4 yellows, two of them combining for a red sending their defender Agustin Barris to the sidelines and leaving them short handed for the rest of the match. At the full time whistle, ASC San Diego celebrated with another very important 3-0 win in the race to the postseason.
ASC San Diego is headed to Chaparral High School to face off with Temecula FC on Saturday, June 1st at 6 p.m.  The last meeting with these two teams was a close 1-0 victory for ASC home at Mission Bay Stadium. The team returns home on Saturday, June 8th against City of Angels FC at 7 p.m. This will be the third double header of the season as ASC San Diego Women will be playing at home against the San Diego Parceiro Ladies starting at 4 p.m. Two matches, 1 ticket. Come catch your hometown soccer heroes in action.