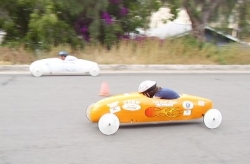 May 24, 2010 (La Mesa) - Bryce Taylor, Sam Ferguson and Ellen Blackwell each won their respective divisions at the La Mesa Soap Box Derby Race on Saturday (May 22). The course was set up on a downhill section of Junior High Drive next to the La Mesa Middle School. Competitors faced each other in tournament bracket pairings to determine the division winners.

As a result of winning their respective divisions, Taylor, Ferguson and Blackwell earned the right to participate in the National Soap Box Derby, held in Akron, OH in July.
For Taylor, success comes naturally. With only two years of racing experience, the Santee youngster has won twice in La Mesa and will make his second trip to Akron. In 2009, he placed fourth at nationals and looks to improve on that finish in 2010.
Taylor felt that observing where other winning racers travel on the track and lowering wind resistance will help him in the upcoming race: "I'm going to look around the track a little more to where people have been winning on the track and get down lower".
Taylor, age 12, competed in the Stock division, where the total weight of the car plus the driver may not exceed 200 pounds and the car shell may not be painted. Participants must be between eight and 13 years of age.
Ferguson, age 11, from Alpine, won the Super Stock division. The weight limit of the car and racer is 230 pounds, while participants must be between 10 and 17 years of age.
Blackwell, age 13, from Santa Maria, won the Masters division, which has the same age limits as the Super Stock, but a higher weight limit of 255 pounds.
All age limits are based on the racer's age as of August 1st of the current year.
Participants can order car kits from the headquarters of the All-American Soap Box Derby. Cars usually take several hours to put together. Several cars have been reused from previous races.
Metal weights are added to the weight of the cars in both the front and back to bring the total weight of the car and racer near their maximum allowed weight limit. The cars are weighed on four wheel scales before racing to ensure that each one meets weight and weight distribution specifications. 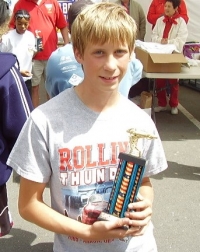 At the start of the race, each car is held in place at the starting line by a gate. When the gate is released, the cars go downhill, powered only by gravity. The race must be electronically timed as the difference between winning and losing can be as little as a few thousandths of a second. The cars have steering and braking capabilities and the participants must wear helmets.
The keys to winning a race, apart from good workmanship on assembling the car, are avoiding movements that cost time and staying low to minimize air drag.
The Kiwanis Club of La Mesa, which organizes the race, will keep the winning cars securely in storage until the three competitors race in Akron. Stay tuned to this page in July as we will provide final results from that race.
Christopher Mohr is a freelance writer in the San Diego area and hopes that the Padres and Chargers can win titles in their respective sports as his favorite hockey team, the Detroit Red Wings, did in recent years.