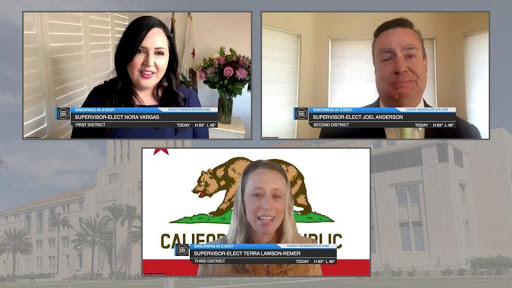 January 4, 2021 (San Diego) – For the first time in decades, San Diego County has three new Supervisors, including Joel Anderson, who now represents most of East County. He replaces Dianne Jacob. who stepped down due to term limits after 28 years of service in District 2.

Anderson, a Republican and former State Senator, joins newly elected Supervisors Nora Vargas in District 1 and Terra Lawson-Remer in District 3. They replace Greg Cox and Kristin Gaspar.  Vargas and Lawson-Remer are both Democrats, shifting the board majority to Democrats.The three new Supervisors were sworn in during a virtual event on Monday.

Anderson acknowledged Supervisor Jacob for working “tirelessly” for constituents, also thanking his wife, Kate, their three children and his supporters.  In addition, he stated, “To all the residents of District 2, regardless of party, or whether you voted for me or not, my job and intent is to represent all of you! “

He talked about the pandemic and emphasized his top priorities including bringing business to East County, providing affordable housing and addressing homelessness.

He acknowledged the “tough and strange times” that the COVID-19 pandemic has wrought, leading to a virtual swearing in ceremony in which he took his oath of office from his kitchen in Alpine. He noted that like most people across the region, county officials and staffers are facing the disruption of working remotely.

He then addressed the hardships the pandemic has caused, stating,” However, those of us who are extremely fortunate to HAVE jobs and health benefits for ourselves and our families must consider ourselves blessed, as many of our neighbors and friends have lost their jobs.”

Anderson continued, “Many business owners have been forced to lay off their employees and even close their doors – some permanently. As terrible as the pandemic is, and I especially keep the loved ones who lost family members in my prayers, let us not forget the tens of thousands of our fellow citizens whose livelihoods have been lost or threatened. In addition, several hundred thousand school children have been forced into “remote learning,” which has reduced achievement and burdened parents and teachers.”

He voiced support for decisions based on science, but not politics, to reduce the burden on small businesses.  “To get through the crisis together, we must ensure that proper safety protocols are in place and encourage all citizens to heed them. However, our decisions should be made by MEDICAL science, not POLITICAL science. There are far too many inconsistencies confusing and angering the public. Why can Big Box stores like Walmart and Target remain open, with few restrictions, but mom-and-pop stores are constantly having the rules changed?” he asked. “One day the Governor and the County say playgrounds should be closed, and the next day they are allowed to open. Did the medical facts change overnight?”

Anderson continued, “This brings me to the key theme of my candidacy: Transparency. Government institutions have a legal and ethical obligation to not only release information to the public, but to be straightforward when doing so. I have never found government to be corrupt but have at times found it to be truthful in the moment. As your Supervisor, I will tell you the truth, and reveal the Good, the Bad and the Ugly about County government.  In the days ahead, you will see me and one of my Board colleagues working together to ensure more openness and allowing for more public input into County decisions.”

He then detailed specific goals for district 2, which encompasses over 275,000 people across 2,000 square miles including the cities of El Cajon, Santee, Lemon Grove, La Mesa and Poway, parts of the city of San Diego, as well as unincorporated areas including Alpine, Lakeside, Rancho San Diego and Ramona plus 11 Native American reservations.

Anderson said he plans to seek partnerships with local elected officials, chambers of commerce, nonprofits and faith-based organizations. He noted that he and his family have lived in Alpine for over 30 years, and encouraged district residents to contact his office for help accessing county services such as license, permits, getting potholes fixed, or voicing concerns over Sheriff response times.

“My first priority is to bring jobs and prosperity to all of East County,” he pledged. This will be done through creative and innovative leveraging of County assets and programs to work with and create incentives for businesses to survive and thrive. This means maintaining and expanding local manufacturing, siting solar farms, and ensuring farmers have the flexibility to successfully grow and sell their crops. I will be coming forward with a number of initiatives that can be implemented, without being mired in years of bureaucracy, to revitalize our communities.”

Regarding housing, he stated, “The way things look now, it’s questionable whether our three children will be able to afford a home in San Diego County. We need to make sure the American dream can be achieved by the generations that follow us. In order to move ahead, we must ensure state environmental regulations are implemented coherently so the local rules are clear and fair.”

He elaborated, “Home builders, the public and interest groups must be able to see a road map that everyone can easily understand. And approved permits must be implemented quickly and efficiently. We will focus like a laser on having sufficient housing stock, rental homes and apartments and TRULY attainable housing. Whenever possible, it will be built around new business centers and transportation networks. But this must work in the real-world, not just on planner's blueprints.”

He noted that homelessness has worsened despite expenditure of hundreds of millions of dollars in recent decades.  The homeless include “thousands of school children and their families, veterans, people with substance abuse issues, the mentally ill and many who, for a variety of reasons, have fallen on hard times. And we would be short-sighted to ignore the likelihood of significant increases in homelessness as a result of the impacts of COVID,” Supervisor Anderson noted.  “I will be coming forward in the very near future with a more affordable process for lifting people out of homelessness. I will be reaching out to government, nonprofits and faith-based organizations to participate in launching a pilot program, hopefully by Spring 2021.”

He concluded that there are many other issues impacting county residents and those in District 2.  “I look forward to working positively with all my new colleagues to tackle these challenges and improve the quality of life for our citizens. I truly believe that with leadership and cooperation, and even the willingness to, at times stumble – but stand up again, we can solve any problem we face.”

Vargas, an immigrant, is the first Latina and first woman of color to serve on the bord.  Supervisor Vargas was sworn in by her goddaughters, Fatima and Farah Jimenez. Afterward, the new board member made remarks in both English and Spanish “I may be the first, but I will absolutely not be the last,”  saidVargas. “I stand before you committed to governing with intentionality, integrity, empathy, transparency and con muchisimo corazon.”

Supervisor Lawson-Remer’s district includes Del Mar, Solana Beach, Encinitas, Escondido, San Pasqual Valley, some communities in the City of San Diego and Marine Corps Air Station Miramar. “We face historic challenges, and we have historic ambition to match so I’m heartened by the partners I’m joining this morning to improve the lives of San Diegans,” said Lawson -Remer. “We have a lot of work ahead and I’m ready to roll up my sleeves and get started.”

The three new board members will join incumbent Supervisors Nathan Fletcher and Jim Desmond for an organizational meeting Tuesday, Jan. 5. The board will select a chair, vice chair and chair pro tempore for the 2021 calendar year.

Due to ongoing safety concerns about COVID-19, the meeting will be virtual, but the public can still watch the proceedings live and request to speak via teleconference or submit written eComment.

Watch online: there may be a 45-second or more delay when viewing the broadcast online, depending on the service and your internet connection.

Listen on the phone:  a call-in line is also available to listen to the live Board meeting while it is in session at 619-531-4716. This is a listen-only line.

Comment:  members of the public can use the eComment service to submit comments on agenda and non-agenda items before and during the meeting.

Those who want to participate in the meeting and speak via teleconference must fill out the online Board of Supervisors tele-comments form and submit it before the meeting starts. After submitting the form, you will receive instructions on how to call in to the meeting to provide your comments.

Large groups wishing to comment on a common item are encouraged to submit comments in writing or to identify one spokesperson to join the teleconference on behalf of the group.