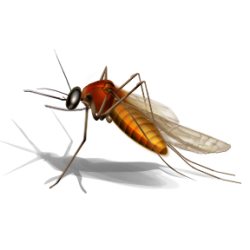 A 73-year-old La Mesa man has been hospitalized with infection of the brain related to the virus.  He is now recovering, San Diego County Health and Human Services reports. In addition, a 44-year-old woman who had been bitten by a mosquito is suffering a rash and flu-like symptoms believed to be West Nile Virus.  Last month, a 43-year-old man in Santee was also diagnosed after donating blood, but he did not have symptoms.

Fortunately, about 80 percent of those infected with West Nile Virus do not have symptoms, and most others have only a mild illness that may include headache, fever, nausea, fatigue, a skin rash or swollen glands.  But about one in 150 victims will suffer serious neurologic complications and the disease can be fatal.  Older people and those with weak immune systems are at greatest risk.

So far this year, eight people in California have died of West Nile Virus.

Mosquitos breed in stagnant water, so it’s important to keep pools and ponds clean. The County’s Vector Control office gives out free mosquito fish to control the insects in ponds, fountains and other water bodies. You can report green or abandoned pools or other water sources to Vector Control at 858-694-2888. Also report birds found dead of unknown causes, since they can carry the disease.

Dump out any standing water in items such as old tires, rain gutters and plant saucers. In addition, repair holes in screens on windows and keep unscreened doors closed to prevent mosquitos from entering your home.