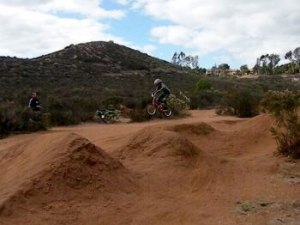 November 18, 2013 (Rancho San Diego) -- Cuyamaca College has begun to enforce restrictions on use of a nature preserve at the Rancho San Diego campus that has been a popular – but illegal – spot for young bike riders.

The area off Fury Road in Rancho San Diego has long been used by bikers who created dirt mounds that enabled them to perform their daredevil tricks. The college is closing the area, part of a sensitive wildlife habitat, while it removes the bumps and replants vegetation to restore the area to its natural state.

College President Mark J. Zacovic and other college leaders met with about 50 bikers Saturday afternoon to explain why they could no longer ride their bikes there.  He told the group, “We need to be responsible and follow the rules of state agencies to keep this as a habitat.”

The area, about four acres, is part of a 53-acre nature preserve on the campus that was set aside in 1994 as mitigation for construction of college buildings. It is also a breeding area for the gnatcatcher bird, an endangered species. Only hiking trails are allowed in the preserve, and the trails already in place in the rest of the preserve remain open.

The dirt mounds used by the bikers have been in existence for at least a decade, but no action was taken while college officials focused on educating almost 10,000 students each year.

The state Department of Fish and Wildlife recently notified the college that the dirt mounds needed to be removed and the preserve restored. 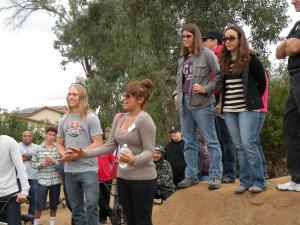 On Tuesday, the college posted “No Trespassing” signs along Fury Road, along with a telephone number to Zacovic’s office.  The college president provided pizza and soft drinks to the group while they discussed the issue.

Elsa Hernandez, Cuyamaca College’s student trustee to the Governing Board, explained to bikers why they can no longer ride their bikes at the nature preserve. (Photo, right)

Several bikers complained that they had no other place to test their skills, and college leaders urged them to organize and seek other property to use. Zacovic complimented the bikers on keeping the area clean and free of trash through the years.

The mounds will be removed in the next few weeks. Eventually, hiking trails will be created that will link with other trails in the preserve.

Zacovic stated, “I look forward to the day when we can we can reopen this area to the public. This preserve is a wonderful natural resource for our community.”