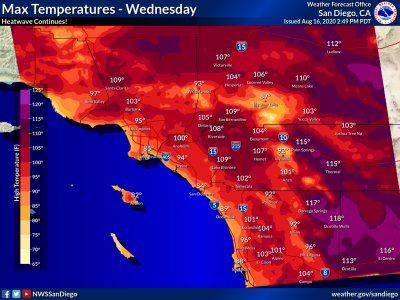 August 17, 2020 (San Diego’s East County) – Over 1,600 lightning strikes have sparked at least 76 fires in northern California in the past 24 hours.  Now thunderstorms are forecast for our region this week, amid a scorching heat wave described as “dangerous” by the National Weather Service. “Record breaking” temperatures may occur, as well as gusty winds, rain, and dangerous lightning Tuesday and Wednesday.

The heat wave is occurring across the state, including Death Valley, where a searing 130 degrees recorded this week may be the highest temperature ever reliably recorded on Earth.

Temperatures 5 to 15 degrees hotter than normal are forecast across southern California inland areas. In San Diego County, lower deserts could reach 120 degrees, high deserts 110 degrees, valleys 104 degrees, and mountains below 5,000 feet could hit 102 degrees.  Warm nights will offer little reprieve, with temperatures likely to stay above 90 degrees. The heat wave will last at least through Thursday and possibly into next weekend, according to NWS meteorologist Dan Gregoria.

Thunderstorms are possibly anywhere in San Diego County on Tuesday,  even in coastal areas, followed by a lesser risk of thundershowers on Wednesday, primarily over mountain areas. Flash flooding is possible in our inland mountain, desert and valley areas.

A Stanford University study earlier this year revealed the role that climate change is playing in producing more severe firestorms in California.  CBS News reports that the number of fall days with extreme fire weather has doubled since the 1980s, while rainfall during fire season has dropped by 30% and the temperature has risen 2% during the same time period.

"It's striking just how strong of an influence climate change has already had on extreme fire weather conditions throughout the state," said study co-author Daniel Swain, a research fellow at UCLA. "It represents yet another piece of evidence that climate change is already having a discernible influence on day-to-day life in California."

Vegetation fires are a natural process here in California throughout the west and elesewhere in the world. Many plants and wildlife have evolved with and are adapted to surviving with fire. Lightning strikes have been a common cause of fires well before man came along but now with global warming and other man made alterations we are facing an onslaught of wildfires all at once. We need to work with this natural process and manage accordingly. Consideration should be given to letting some fires burn along with sensible planning for development in fire prone areas. Don't you think?