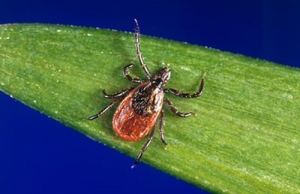 May 14, 2017 (San Diego’s East County) - You’ve heard of Lyme Disease, Rocky Mountain Spotted Fever and Rabbit Fever—all diseases spread by ticks, and all have spread to our region after first starting elsewhere in the country.  But now there’s a tick-borne illness that’s much deadlier than those ailments.  It’s called Powassan, or Pow for short.

Most people who are bitten by a tick with the disease will never show symptoms.  But of those who are infected and do have symptoms, about 15% of them will die – and half will suffer permanent neurological damage, says Dr. Jennifer Lyons, chief of Neurological Diseases and Inflammatory Diseases at Brigham and Women’s Hospital in Boston, CNN reports.

The disease also comes on a lot faster than Lyme disease, which can take years to be diagnosed and decades to cause the most serious harm.  By contrast, people bitten by a tick carrying Powassan usually become sick anywhere from a week to a month later with fever, headache and flu-like symptoms, and sometimes a rash.

Some develop seizures, encephalitis, which causes swelling of the brain and spinal cord. They may be unable to breathe on their own.  Patients may lose consciousness or be disoriented.

Powassan was first discovered in Ontario, Canada in 1958, but is now found in parts of the U.S. The good news is that so far, only 75 cases of Powassan have been reported in the past 10 years in the U.S. – and so far, all of those cases have been in the northeast and the Great Lakes Region.  So, the risk is highest if you’re traveling to those areas, though concerns remain that the disease could spread west, like other tick-borne illnesses have done.

Tick populations are growing due to warmer winters., and infection rates among deer are rising. The disease is carried by three types of ticks, including the deer tick.

Infections are most likely from late spring through mid-fall, and people who are outdoors in brushy areas are most at risk.

If you develop symptoms and were bitten by a tick, check with your doctor.  Powassan disease can be diagnosed by laboratory tests of blood or spinal fluid to detect antibodies that the immune system makes against the viral infection.

There is no vaccine and no effective treatment for Powassan, though medical experts continue trying various approaches in hopes of a break through.

For now, the most effective strategy is prevention. If you are going to be outdoors in tick-infested areas, wear long sleeves and long pants, and be sure to use an insect repellent effective on ticks, meaning those with DEET, picaridin or IR3535. Lemon eucalyptus oil has also been found effective.

Using insect repellant applied to your skin will also protect you against Lyme Disease, which though usually less dangerous, is still debilitating – and far more prevalent. At least 30,000 new cases are diagnosed each year in the U.S., the Centers for Disease Control reports, and some experts suggest the real number of cases could be ten times higher.

Repellants with DEET last only a few hours.  You can also treat clothing and gear with permethrin, which will last through several washings.

When outdoors, avoid brush areas and tall grass if possible.

Search for and remove ticks immediately, before they have a chance to bite.

IF you find a tick that has attached itself, the CDC recommends removing it with fine-tipped tweezers to grasp the tick as close to the skin's surface as possible. Pull up with steady, even pressure. After removing the tick, thoroughly clean the bite area and your hands with rubbing alcohol, an iodine scrub, or soap and water.

Parents should check their children, making sure to look in their hair. Also check pets and clothing and remove any ticks found.

Bathe or shower within two hours after coming indoors, if possible, to wash off and find ticks.

If bitten, research symptoms of not only Powassan, but other tick-borne illness such as Lyme Disease, which often begins with a tell-tale bullseye shaped red rash.

To learn more about ticks and tick-related illnesses, you can visit www.CDC.gov/ticks. 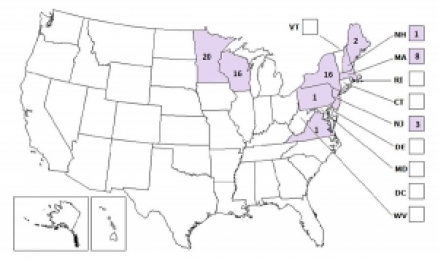