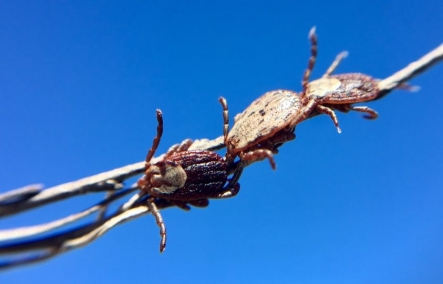 Photo:  A trio of hungry ticks, waiting for a meal to walk by.

September 10, 2019 (San Diego) - County environmental health officials are reminding people to protect themselves and their pets when hiking after they trapped ticks infected with tularemia along Lopez Canyon Trail in Sorrento Valley.
Tularemia, also known as “rabbit fever,” is a bacterial disease that can be passed to hikers and pets by infected ticks when they bite.
Officials said the best way people can protect themselves is by wearing insect repellent and proper clothing and by using insect control products on their pets that kill fleas and ticks.
Tularemia can be successfully treated with antibiotics and there has not been a human case of tularemia reported in San Diego County since 2005. However, tularemia can make people extremely sick and even kill them. Tularemia can be found in San Diego County in wild hares, rabbits and rodents.
The national Centers for Disease Control and Prevention says the most common way for people to be exposed to tularemia is through the bite of infected ticks. The ticks feed off infected animals and pass it on to people by biting them when people and pets hike or walk through grassy backcountry areas, on trails and in the wild.
The infected ticks collected in Sorrento Valley are the sixth reported finding of tularemia in the county this year, all near the Lopez Canyon Trail area. County Vector Control found numerous infected ticks there last year as well.
The County’s Vector Control Program monitors the population of vectors—animals like ticks, rodents and mosquitoes—that can transmit diseases to people.
Ticks are tiny, eight-legged parasites related to spiders. They “quest” for food by crawling out on leaves and vegetation and extending their hooked front legs to latch onto passing animals and people to bite and feed on their blood. Ticks have been known to carry other diseases in addition to tularemia, including Lyme disease and spotted fever illnesses, although tick-borne diseases are rare in San Diego County.
County public health officials said anyone who is bitten by a tick should not panic, but carefully remove it. They said if a person develops a rash or fever within several weeks of being bitten they should see a doctor, tell them about the tick bite, when they were bitten and where they think it happened.
Here are seven easy tips to help you protect yourself, your family and pets from ticks.
For more information about ticks, go to the County of San Diego Department of Environmental Health’s tick webpage and the National Centers for Disease Control and Prevention’s tick webpage. You can also watch this County News Center TV video, “Tick Talk.”