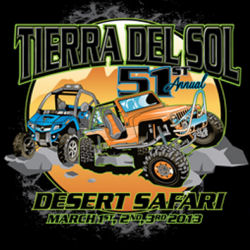 February 23, 2013 (San Diego)—Mark your calendars if you are into off road fun-- the Tierra del Sol Desert Safari will be held on March 1-3, at the Ocotillo Wells Vehicle Recreation Area, near Ocotillo Wells.

This year the 51st annual Safari will be in honor of one of the early members of the club, Joe Branch, who died last year. The club itself was incorporated in 1961 as a nonprofit, though previously the early members met in the Anza Borrego State Park (established in 1941) where members met at the Truckhaven café, which was “at the end of thirty miles of rough road passing over hills, washes and mesas.”

This year the safari includes off-road dealers and training grounds where you can learn how to safely operate your Jeep or other 4x4 vehicle, as well as a guided trail adventure in the desert, with three possible paths.