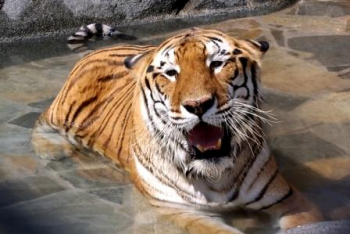 “Raja’s spirit will continue to live on as we uphold our promise to provide a safe haven for the unwanted and abused. Rest in peace Raja, you will forever be in our hearts.” -- Bobbi Brink

October 15, 2013 (Alpine) – Last week, Lions Tigers and Bears in Alpine held a memorial service for Raja, the beloved tiger patriarch who resided at the facility since his rescue from a Texas owner in 2002.  The 17-year-old tiger died October 7 of complications from chronic renal failure, a common cause of death in elderly felines.

“Raja and Natasha were the very first rescues at LTB, and the founding inspiration behind our ongoing efforts to make the world a better place for some of nature’s most beautiful animals,” said LTB owner Bobbi Brink. 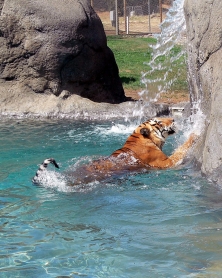 Raja is also survived by his daughter, Tabu.  A second daughter, Sitarra, died earlier this year of  a spinal cord injury in a freak accident that left her paralyzed. Although LTB is a no-breed facility, Natasha was pregnant at the time  Raja and Natasha were rescued from a Texas facility where they were kept in a small, cramped cage.

Brink raised funds to build “Tiger Trails”, a spacious exercise area for the rescued tigers that included a pool, waterfall, climbing equipment and plenty of room to room. East County Magazine editor  Miriam Raftery was at Lions, Tigers and Bears for the opening of Tiger Trails and witnessed the tigers enjoying freedom for the first time in their lives. The photos on this page were taken then. Read our story and view a brief video of the opening of Tiger Trails, which included images of Raja and Natasha: http://www.eastcountymagazine.org/a_purr_fect_place

The facility has grown since then to house numerous varieties of exotic cats as well as several bears.  Donations are sought to allay expenses and help with the car of Raja’s mate, Natasha, and daughter, Tabu.  Visit www.lionstigersandbears.org for details.

Brink concluded, “Raja’s spirit will continue to live on as we uphold our promise to provide a safe haven for the unwanted and abused. Rest in peace Raja, you will forever be in our hearts.” 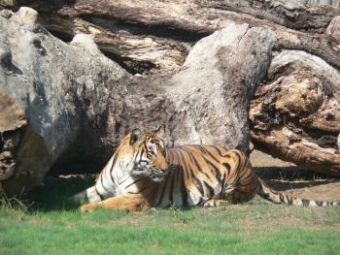 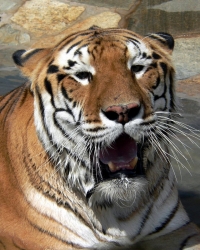