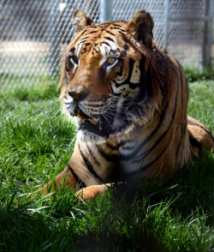 September 27, 2017 (Alpine)—Phevos, a  17-year-old tiger rescued from Greece and given refuge at Lions, Tigers and Bears in Alpine has died.

In an e-mail from LTB, founder Bobbie Brink states, “Phevos' health had been on a slow decline over the last two months.

He had progressively shown signs of pain and   became increasingly withdrawn from his normal interests and activities.  His appetite had steadily decreased, making our abilities to provide pain medication difficult, since medication was administered through his daily diet.”

So the decision was made to humanely euthanize Phevos.  Brink adds, “Phevos was truly a tiger that defied all odds thrown his way.”

Born in captivity and used in an Italian touring circus group, Phevos was seized with his mate Athena, and five other tigers, by Greek authorities in 2002. Phevos and Athena were sent to the Trikala Zoo, outside of Athens, Greece where they lived together until March 2014, when Athena passed away due to medical neglect. Athena had a gaping wound in her paw caused by a Christmas ornament that went untreated for over a year. With the economic crisis in Greece, conditions of the zoo deteriorated over time, making Phevos' rescue an urgent matter, as he was not receiving necessary care.

David Barnes, a UK citizen who initially helped place the two tigers at the Trikala Zoo, and who first brought the plight of Phevos to Brink’s attention, helped arrange the rescue that would bring this suffering tiger to Lions Tigers & Bears. Eight months after Athena's death, Phevos was rescued from the Trikala Zoo and brought to Lions Tigers & Bears. Phevos' rescue made international headlines, as he was "the tiger that travelled halfway across the world for a better life."

Brink concludes, “And a better life indeed is what Phevos received here at our sanctuary. Every effort was  made to ensure his comfort and restore his health.

Phevos was a gentle giant, with a calm and reserved demeanor. He enjoyed sunning himself in the cool grass, lounging in the shallows of his pool and taking naps in his beds of hay. Phevos liked to spend time with Maverick, our two year old male tiger, as they would enjoy each other's company through their habitat fences.”

Donations to support the rescue operations of Lions, Tigers and Bears can be made at http://www.lionstigersandbears.org