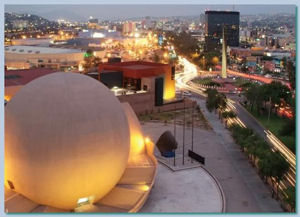 October 18, 2012 (Tijuana)--As an American living in Tijuana, I have a unique perspective and vantage point on Tijuana Innovadora 2012, the 10-day showcase of business technology and culture in Tijuana, Mexico, that opened October 11, 2012 and ends on October 21, 2012. The eyes of the world will once more turn to Tijuana, truly a mosaic of Mexico, and discover what creativity and courage has led them to create. There’s no doubt, they are bound for greatness.

A group of businessmen and citizens strongly committed to Tijuana began to plan an event three years ago that would eventually change the image of their city, which had been pummeled by several years of bad news. That is how Tijuana Innovadora was born, as an emphatic message of locals and foreigners alike that the city’s residents were skilled, creative and driven. And that their contributions in science, education, art and technology were benefitting people the world over. Former United States Vice President Al Gore was a keynote speaker at this inaugural event in 2010. 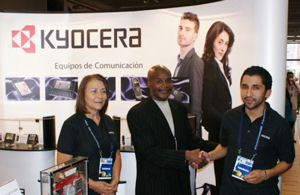 Many major companies and corporations headquartered in other countries, such as Kyocera, Nissan, Toyota and Caterpillar (TurboTec), were on display in an exhibit area at Tijuana Innovadora 2012. Kyocera, having a plant in Mexico for many years, has stated as its Management Rationale: “To provide opportunities for the material and intellectual growth of all our employees, and through our joint efforts, contribute to the advancement of society and humankind.” In my interview with Jay Scovie, Director of Corporate Communications and Education for Kyocera, as well as Carmen Hernandez and Salvador Loera at this event, I got the impression that Kyocera stands behind that management rationale. 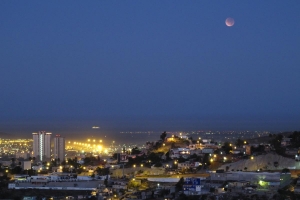 I have gotten to see firsthand this transformation of Tijuana and its maligned citizens, that were often pummeled in the press, to this city now of technological innovation and promise. Tijuana Innovadora 2012 promises to make the world aware of the business and economic development of this sleeping giant. And, being situated just south of the border from San Diego, the entire region benefits.

These are exciting times for Mexico, and particularly Tijuana. Of course, everyone should know by now that Mexico won the gold medal in soccer recently at the Olympics. While giving a keynote speech at Tijuana Innovadora 2012, President Felipe Calderon announced that next year Tijuana will become the first city in Mexico to make the switch to digital television. It certainly helped in the selection process of Tijuana being the pilot city by its close proximity to the United States, said Calderon, with the rest of Mexico to follow suit for this ambitious technological program by the end of 2015.

San Diego Mayor Jerry Sanders, who was an honored guest at the ribbon cutting and opening ceremony of Tijuana Innovadora 2012, had this to say about this prestigious event: “On behalf of the citizens of San Diego, it is with great pleasure that I welcome everyone in attendance at Tijuana Innovadora 2012. Over the past several years Tijuana has continued to grow to become the vibrant and exciting city that it is today. With the decline in crime and violence the City of Tijuana has been able to prosper like never before.

Tijuana Innovadora provides an excellent opportunity to demonstrate Tijuana’s exceptional growth and potential to the world. This year’s conference will feature leading thinkers from Mexico, the United States, and other countries, but most importantly it will showcase Tijuana as the center of technology and culture that it has become. Tijuana Innovadora will focus on the Tijuana- San Diego region as a hub to world-leading innovation. Although we are separated by a border, San Diego and Tijuana have also been able to expand our relationship in recent years to become what we refer to as ‘two cities, one region.’ We have every reason to believe that this economic region will continue to grow and become more economically competitive every day. Please accept my best wishes for a successful and memorable event.” 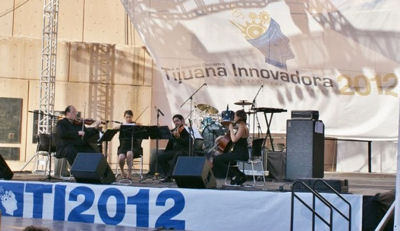 Several years ago I wrote an article for the Baja Times Newspaper in Rosarito Beach, Mexico called Accentuate the Positive in defense of the negative portrayal of Baja California, and specifically Tijuana and Rosarito Beach. At a panel discussion during Tijuana Innovadora 2012, the editor of the U-T san Diego Newspaper, Jeff Light, acknowledged that Tijuana does indeed get an unfair portrayal in the media compared to other cities. Light and the other media panelists indicated that events like Tijuana Innovadora 2012 that highlight what the city has to offer, could go a long way towards removing those negative images. Prime examples of that were the String Quartet performance and the event put on by the local chefs, as was as the modeling event with 75 models on display from both sides of the border. “People’s perception of cities and places that they have never been to, these are all stereotypes,” Light said at this event. “What we are up against is changing these stereotypes,” further stated Light. It looks light Tijuana Innovadora 2012 has effectively done just that.

I recall quite vividly the Tijuana of several years ago, when I was a resident here, and the incoming President at the time was faced with rampant violence and corruption. I also recall quite humorously walking across the border to San Diego, and seeing the many Mexican police officers with slingshots in their holsters, instead of their guns, as the new President at the time, Felipe Calderon, had the guns of the police officers confiscated to do ballistics tests on. I certainly realize now, that sometimes tough times and situations, requires tough measures. We, and I say we, because I was a part of that “we” in Tijuana, have come a long way from those turbulent times, and I am so proud to see this Renaissance in a city that truly deserves it.

Tijuana is preparing its citizens to handle the challenges of the technological innovations exhibited at Tijuana Innovadora 2012.  I see it firsthand in the students at Instituto Technologico, just a couple of blocks from where I live in the Tomas Aquino area of Tijuana. I can actually look down from my bedroom window on CECUT, or the Centro Cultural Center where this event is being held, and marvel at the many volunteers that have pulled this event together. It is these young students from schools such as Universidad Xochicalco and Instituto Technologico that will provide the brainpower to lead Tijuana into this era of innovation and growth.

Tijuana native son and musician Carlos Santana, was once quoted in an American publication as stating that America had saved his life. I could just as easily say that about Mexico for myself, as to how I have been treated here.  I am so proud of what I have seen at Tijuana Innovadora 2012, as well as what I have experienced in this beautiful country over the years. 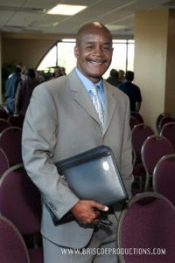 Dennis Moore has been a freelance contributor to the San Diego Union-Tribune Newspaper, EURweb, the Baja Times Newspaper in Rosarito Beach, Mexico and the Baja Times in Ensenada, Mexico. He is also the author of a book about Chicago politics; “The City That Works: Power, Politics and Corruption in Chicago. He is additionally the President of Contracts & Agency, LLC, a marketing and promotions firm. Mr. Moore can be contacted at contractsagency@gmail.com or you can follow him on Twitter at: @DennisMoore8.

As reported in today's U-T San Diego, the team from Tijuana, Mexico continued their robust hitting and winning ways in the Little Lleague World Series, being held at South Williamsport, Pennsylvania. Five home runs helped Mexico record team's second straight mercy-rule victory of series, a 13-0 victory over Panama on Sunday. Third baseman Ramon Mendoza, who drove in six runs, hit two of the home runs for this juggernaut from just south of the border. A dream game for the Little leage World Series championship would pit Tijuana against Chula Vista, whom many are friends with each other.

Construction of a a 10.5-mile rapid-transit bus route linking the San Ysidro border to the eastern El Florido area of the city is scheduled to begin early next year, the first step of a long-awaited reform of the city's antiquated and inefficient public transportation system, according to a story by Sandra Dibble in the U-T San Diego Newspaper.

Tijuana broke out in celebration Sunday night as fans honked horns, waved flags, and hollered from their cars after the Aolos captured the Mexican soccer title.

Fast-rising Xolos reach their goal: playing for the title in Mexico's top league. Club Tijuana Xoloitzcuintles de Caliente, or Xolos for short, suddenly finds itself in the finals of Mexico's top league, hosting top-seeded Toluca at sold-out Estadio Caliente in the first leg of the two-game series. As I crossed the border from San Diego yesterday into Tijuana, it seemed that everyone were wearing the red colors of Xolos..

A federal legislator from Baja California on Thursday joined the region's governor and the mayor of Tijuana in protesting the latest update to a U.S. State Department travel warning for Mexico that urges American citizens "to exercise caution in the northern state of Baja california, particularly at night," according to a story by Sandra Dibble in today's U-T San Diego.

Nice article, Dennis.  The YouTube video was enticing as well.  So tell me, Dennis, are you living in Mexico or Chicago?  Or both?  We miss you at the San Diego Guild meetings.

I am actually back in Tijuana, my adopted home, for many of the reasons that I have indicated in this article. I hope to be back with the San Diego Writers/Editors Guild soon. I miss you guys also.

In an aggresive bid to move beyond low-wage factory jobs and toward an entrepreneurial economy, Mexico is producing graduates in engineering and technology at rates that challenge its international rivals, including its No. 1 trade partner, the United States, according to a story by William Booth in The Washington Post. President felipe Calderon last month boasted that Mexico graduates 130,000 engineers and technicians a year from universities and specialized high schools, more than Canada, Germany or even Brazil, which has nearly twice the population of Mexico, according to Booth's story. "Mexico is now one of the top producers of engineers in the world," said Oscar Suchil, director of graduate affairs at the public National Polytechnic Institute, where 60 percent of its 163,000 students are studying engineering and paying just $12 a semester in tuition, according to Booth's story. The United States awarded 83,000 undergraduate degrees in engineering in 2011, according to the American Society for Engineering Education. UNESCO said that Mexico issued 75,575 undergraduate diplomas in engineering in 2010, the most recent statistic available. Pehaps events such as Tijuana Innovadora 2012 is behind that growth in engineering.

This is a beautiful piece about the Baja. I watched the Youtube video and just fell in love with the place. I have always had a desire to live there, and you have just heightened that desire, Dennis. Beautiful--just beautiful! I love reading Dennis Moore's columns.

Thank you Carole, but you should have also given a plug to your fantastic book, Choices, which I had the honor to review.