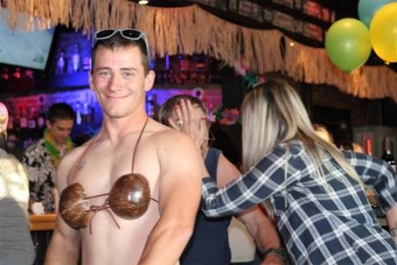 February 14, 2017 (Lakeside) -- “I came for a date,” long-time customer Norm Ferreira said, recalling his first experience at East Bound Bar and Grill in Lakeside seven years ago. “The date didn’t last, but the restaurant did.”

On February 11th, Eastbound commemorated its 7th anniversary with all-day celebration that included a beer belly contest, live music and mimosas, a pajama breakfast with free pancakes for kids, and a good will effort to raise money for Courtney Bell, who was diagnosed with stage 4 non-Hodgkin’s Burkett’s Lymphoma in December 2015.

“It will be a fun, all day celebration for everyone.  Last year with did a Vegas theme and this year it’s a Tiki theme,” said co-owner Marco Rodriguez.

Ferreira, a Santee resident, praised Eastbound’s “way of greeting you” as one of the differences between Eastbound and other bar-restaurant experiences.

Manager Jimmy Zoll explained the clientele and experience. “Really a lot of regulars and we offer old school bartending.”  Jason Nichols is an example of a long-time employee who started out bartending. The hours of 1 p.m. to 3 p.m. were deemed the old school Bartenders Hours.

John “LJ” Turner, of Lakeside dressed in a bra made of coconut shells and shorts with an overlying hula skirt to take a shot at winning the beer belly contest. The master of ceremonies noted he was a native of Boston, Massachusetts but lived here.  Those facts were disputed by Turner, but the real fact of the matter is his beer belly was non-existent.

Besides that, Turner quipped, “Alcohol is my dance technique,” because he also lent his dance skills to a free-style dance before the contest. His competition brought Santa Claus level bellies to the contest. What was obvious is the pure fun Turner brought to the whole event.

With promises of “Everybody gets Lei’d” for the 9-12 p.m. time slot, the fun and games part also came down to 25% of the proceeds still going as a fundraiser for Courtney Bell.

Their all-day celebration was well attended, even “packed” by most standards.  Plates of burgers and fries, TVs s on with sporting events, a little impromptu dancing now and then, and a general warmth with an atmosphere of merriment was evident. Out of 980 reviews on their Facebook page, they nailed a 4.5-star rating.

Courtney Bell had this to say on Eastbound’s Facebook page:  “I cannot thank you guys enough for last night.  The generosity and love was overwhelming.  Thank you for giving me that privilege I am forever humbled.  I will continue to fight my battle for my community. “ Bell added that Lakeside is “an amazing community.”

Copper foil is usually given on a 7th wedding anniversary.  Copper prices are surging in the markets of late.  The fates of 7-year-old Eastbound Bar & Grill are also soaring--with fun as well as appreciation for being do-gooders.