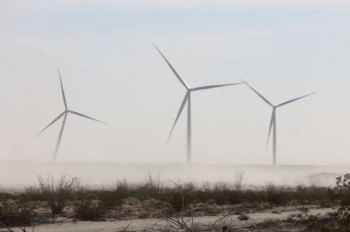 April 1, 2014 (Ocotillo) – Photographer Jim Pelley posted this photo on his Facebook page, which he stated was shot “early this morning, after very heavy winds last night.”

“Crooked in more ways than one,” another wrote of the project.

“I know they built some of the foundations on soft sand,” said another.

One resident opined that surrounding the community with wind turbines “is wrong. It will come back to haunt the greedy developers.”

Yet another stated, “I hate those wind mills…They all need to fall.”

Pelley told ECM some people were driving around the desert today  in search of the turbine that appeared ready to topple—until he added a second post making clear that the image was an April Fool’s Day gag.