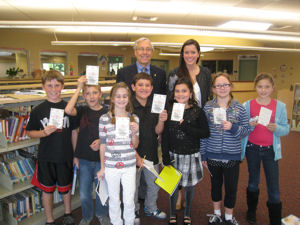 A sharing of artifacts recovered from the Titanic wreck site

January 22, 2012 (Santee) -- Fourth grade students at an East County elementary school were treated to an extra special show-and-tell in January. A sampling of artifacts recovered from Titanic, 2.5 miles below the ocean’s surface, were shared with more than 130 enthusiastic Rio Seco Elementary students in Santee. The show-and-tell was a preview of Titanic: The Artifact Exhibition, opening Feb. 10, 2012 at the San Diego Natural History Museum.
While wearing white gloves, Theresa Nelson, an exhibition spokesperson, showed the students a piece of paper currency and a wallet recovered from 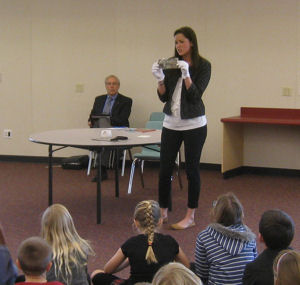 the wreck site.
“What's so incredible about this money is that it’s a little bigger than what we use today and it's in remarkable condition,” said Nelson. “The tanning process used for the leather wallet prevented its contents from disintegrating – making it a virtual time capsule from 1912.”
Similar to the Museum’s exhibition experience, students received a replica boarding pass of a real passenger aboard Titanic with a description of that passenger. Two of the 4th graders assumed the identity of second-class passenger Mr. Adolphe Saalfeld, a perfume maker who was bound for New York to sell his samples. There was an audible sigh from the students when Nelson picked up a delicate perfume vial, also recovered from the wreck site, and declared that the vial belonged to them.
The show-and-tell was a preview for the students’ upcoming field trip to Titanic, the Artifact Exhibition at the NAT. The exhibition has learning guides available for elementary, middle and high school classes as well as scouts, seniors, youth and church groups. The scout guides offer an opportunity to earn a merit badge. The guides can be downloaded from theNAT’s website.
The exhibition will be in San Diego for seven months and corresponds with the 100th anniversary of the Ship’s sinking on April 15, 1912. Visitors will experience the history and compelling human stories of Titanic, told through extensive room re-creations and 200 artifacts, 175 of which have never been seen on the West Coast.
“This is a rare opportunity to view these historic pieces in San Diego,” said Michael W. Hager, the Museum’s president and CEO. “The ability to view 200 artifacts recovered from the Ship’s wreck site creates a physical connection and brings to life the personal stories of that fateful voyage and the challenge and adventure of recovering artifacts from the wreck site many years later.”
Tickets are $27 and include admission to the museum and 3D theater, with discounts available for museum members, students, children, seniors, military and groups of 10 or more. To purchase tickets or for more information, visit www.sdnhm.org or call 877-946-7797.