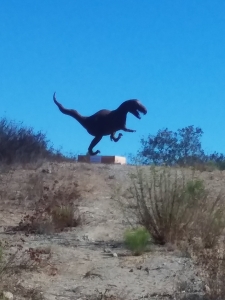 September 28, 2018 (La Mesa) – Last week,  San Diego Union-Tribune writer Karen Pearlman posted a photo of a Tyrannosaurus Rex metal sculpture that mysteriously appeared in La Mesa at the future site of the La Mesa Summit Estates, raising the question of why the giant dinosaur statue had suddenly shown up in the Jewel of the Hills, as La Mesa is known.

Now, the project developer, Jeff Phair, has solved the mystery.  He sent an email to East County Magazine explaining that he was out of town when media first contacted his staff, who didn’t know about the new arrival.  “The mystery is solved,” he reveals. “My sons, my wife, and I installed “Toby The T-Rex." 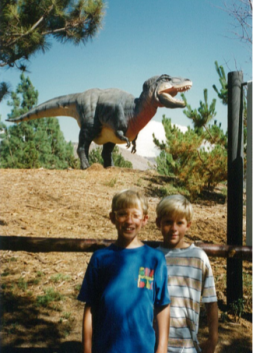 Three decades ago, his young sons had a fascination with dinosaurs, including their favorite toy, a three-foot-tall dinosaur which they named “Toby The T-Rex,” Phair explained. (Photo, right: the Phair sons at the San Diego Wild Animal Park 30 years ago.)

“When our sons were six and seven years old, we were on a weekend getaway to Borrego Springs,” he recalled.  “We rode our bikes all over the area looking at Ricardo Breceda’s incredible sculptors of dragons, horses, and dinosaurs.  Our sons asked Julie and me if we could take one of the dinosaurs home with us.  As fathers often do when placating young children, I responded, `Maybe someday, boys.’”

Fast forward to Labor Day weekend this year when Phair and his wife, Julie, were driving in the backcountry.  “We came around the corner on a winding road and there was a giant dinosaur on the side of the road in Aquanga, east of Temecula. We pulled into the outdoor gallery of Ricardo Breceda, the famous metal sculptor.  On display were hundreds of life size sculptures of horses, jungle animals, and dinosaurs.  For Julie and I, it was a `trip down memory lane,” says Phair.

After seeing the T-Rex at Ricardo Breceda’s gallery two weeks ago, he says, “We could not resist buying him, even though we had no idea what we would do with him.  We thought that one of our sons would like the T-Rex in their backyard for grandchildren to play with.” However, it didn’t work out that way. “They were pleased that we remembered how much they liked dinosaurs, but declined our offer.  Julie and I were then stuck with what to do with an 8-foot-tall 300-pound T-Rex,” Phair adds.

The next day, while driving to the site of his La Mesa Summit Estates development, Phair saw the pink lips painted on the large boulder near the intersection of High Street & Sacramento (500 yards south of his property).  Those iconic lips have been there for decades.

“Just then I realized that I have 10 acres of land that would be a great home for my T-Rex,” he says, adding, “Julie, our sons, and I installed T-Rex at his temporary home.  The La Mesa Summit Estates will have a park for use by all of the La Mesa Community.  After completion of the park, Toby The T-Rex will have a permanent home in the La Mesa Summit Estates Park for future generations of young boys and girls to enjoy.”