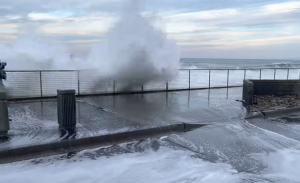 January 15, 2022(San Diego) – Public Watchdogs, a nonprofit advocacy group, is expressing deep concern for the public’s safety regarding the 3.6 Million pounds of deadly radioactive nuclear waste stored on the beach at San Onofre just north of San Diego, 108 feet from the Pacific Ocean, in a USGS designated tsunami inundation zone.

A tsunami advisory was issued earlier today for the entire West Coast including San Diego after an underwater volcano erupted near Tonga in the South Pacific. Although San Diego fortunately did not have flooding, the eruption did trigger a tsunami and flooding that hit parts of northern California including Santa Clara and other coastal communities, submerging cars and ripping boats loose from moorings.

The San Onofre site houses more than 70 steel-lined silos filled with canisters containing over 50,000 pounds of deadly nuclear waste. Although today’s tsunami did not do damage locally, Public Watchdogs’ analysts have warned that a larger tsunami could breach the seawall and inundate the radioactive nuclear waste dump’s partially below-ground silos with saltwater and mud, which could block the cooling system.

The waste dump, known as an “ISFSI,” or “Independent Spent Fuel Storage Installation” is operated by Southern California Edison, the majority owner of the failed San Onofre Nuclear Generating Station (SONGS), which ceased operation due to a radiation leak.

In February of 2020, Public Watchdogs filed a petition to revoke Southern California Edison’s right to bury its deadly cargo from the decommissioned nuclear reactors on the beach. According to Public Watchdogs’ subject matter expert, Paul Blanch, who authored the petition: “New information has come forward that the potential for uncontrolled criticality is credible, has never been analyzed, and may have extreme consequences for Southern California.” According to Blanch “The Nuclear Regulatory Commission has refused to address this issue.”

“Criticality” is a sustained nuclear reaction.

“We had a lot of thought that went into the design of our spent fuel storage systems, including both seismic threats and tsunami threats,” Dobken told ECM. “Those were both evaluated thoroughly. The systems themselves can be inundated by 50 to 125 feet of water and still perform safely. The systems are protected by a 28-foot-tall sea wall.”  The largest tsunami ever to strike Southern California was 3.4 meters, or roughly 10 feet, back in 1812, he adds.

Dr Neal Driscoll of Scripps Institution of Oceanography did the seismic and tsunami studies on SONGS.  “They went offshore in a boat, mapped the entire seashore off the coast and what they found was a couple of features that really prevent large-scale tsunamis from affecting the coastline where SONGS is located,” Dobken states.

He explains, “There’s no historical evidence of undersea landslides which would generate a large near-field tsunami. Then offshore there is the California Borderlands, which is a series of canyons and peaks which would essentially muffle any tsunamis which came from, like, an undersea volcano half an ocean away. Both of these would limit the size of a tsunami which could affect SONGS.”

For more information on safety and decommissioning at SONGS, visit https://www.songscommunity.com/decomm-digest/tsunami-safety-at-songs