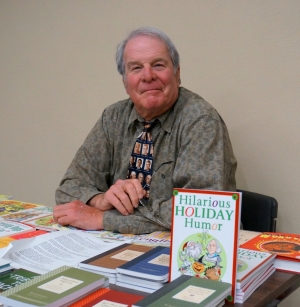 May 10, 2018 (Santee) – Who was our youngest president?  Who was our oldest? Who was our tallest, shortest and fattest?  Find out on Wednesday, May 16th,, when San Diego Union-Tribune columnist Richard Lederer will offer a treasury of fascinating facts about the feats, families, foibles and firsts of our American presidents.

The self-proclaimed “Wizard of Idiom, Attila the Pun and Conan the Grammarian” will be sharing his wit and wisdom on our nation’s presidents at the Santee City Hall, building 7, at 10671 Magnolia Avenue in Santee from 9 a.m. to 10:30 a.m. The even is sponsored by Santee Seniors 55 Plus and San Diego Oasis. It’s free and worth every penny!

Dr. Lederer has sold over a million books, also hosting “A Way With Words” on KPBS and authoring “the “Lederer on Language” column in the San Diego Union-Tribune. He will be signing copies of his books at the event.

His books have been named Book-of-the-Month Club and Literary Guild alternate selections and his observations on language have appeared in magazines throughout the United States.  He has been elected International Punster of the Year and won the Toastmasters International Golden Gavel. In addition, he makes about a hundred appearances a year as a speaker in a wide range of venues.

To learn more about Richard Lederer or to purchase his books, visit his website at www.Verbivore.com.