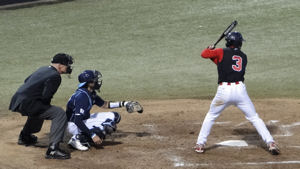 By Ryan Schuler
March 25, 2012 (San Diego)--The bases were loaded with two outs in the top of the second inning. San Diego State held a 1-0 lead in the March 20 game, after the speedy Greg Allen scored on a wild pitch in the first inning. Up to the plate came the No. 9 hitter in the University of San Diego lineup, Austin Bailey.
The freshman second baseman would make the most of his first at-bat of the evening. Bailey tripled with a line drive into the right-center field gap to score all three runners on base. Just like that, USD had grabbed a 3-1 lead, a lead they would add to, but never relinquish.
The Toreros defeated the Aztecs, 5-1, on Tuesday night at Tony Gwynn Stadium to take the first game of the “Black and Blue” series, also known as grudge matches between the two teams with citywide bragging rights on the line. The Toreros have a little more to brag about nowadays, as the win brings USD’s record to 18-6, while the Aztecs, losers of five straight, sit at 9-12 overall. 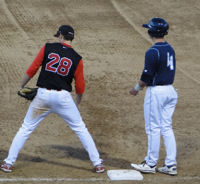 USD starter Dylan Covey, a first round pick in last year’s Major League Baseball Draft, pitched the first two innings for the Toreros, allowing one hit and one unearned run, before turning over the reins to Max MacNabb. MacNabb, who was credited with the win, pitched four innings, while only allowing one hit and striking out three. James Pazo and the nation’s saves leader, Michael Wagner, finished the game, combining to pitch the last three innings.
SDSU starter TJ Kenzora would be saddled with the loss after allowing three unearned runs in three innings of work. Four other Aztec pitchers would combine to finish the final six innings, allowing only two earned runs the rest of the game.
Bailey led USD offensively, going 2-for-4 with four RBIs, while AJ Robinson chipped in two hits and scored a run. Seby Zavala was the only Aztec with multiple hits, as USD’s pitching staff limited SDSU to five hits the entire evening. Zavala is second on the team with a .378 batting average.
The Aztecs threatened in the bottom of the second inning when the bases were loaded with only one out. Yet, Covey was able to escape the jam unscathed. SDSU would also threaten with the bases loaded with two outs in the bottom of the eighth and two on with no outs in the ninth, but were unable to cash in for runs.