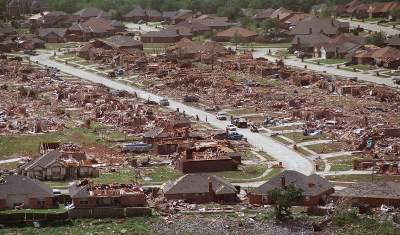 May 20, 2013 (San Diego) – One of the worst tornadoes in recorded history has ravaged the Okalahoma City suburb of Moore, killing at least 51 people, injuring 120 including many children, and destroying 500 homes. The two-mile-wide twister destroyed an elementary school and entire neighborhoods nearby.

Eight Search Dog Foundation rescue teams have been dispatched to search the rubble for survivors.  One of the search dogs, George, was recruited from Labradors and Friends Dog Rescue Group in San Diego. 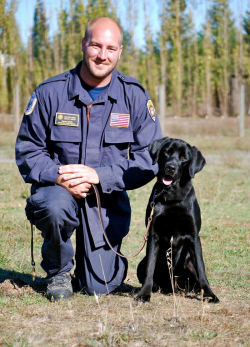 George is partnered with Damon Wirth of Lincoln, Nebraska’s Fire-Rescue Task Force 1. His guardians are Susan and Donald Durance and Debbie Mansur.

“How do we explain this to the kids/ Norma Bautista, mother of a student at the school, told CNN.  “How are they going to wake up tomorrow and everything’s missing—the school, these houses, their friends,” she asked. “In an instant, everything’s gone.”

The monster-scale storm has disrupted power, communications, and transportation in the region.

Authorities indicate the death toll is expected to rise.

Yesterday, tornados ripped through areas of Texas.  Tonight, a tornado watch has been issued for portions of Indiana, Illinois, Kentucky and Missouri. http://www.spc.noaa.gov/products/watch/ww0197.html