September 14, 2008 (La Mesa)--Revelations of preventable patient deaths and alleged neglect at Sharp Grossmont Hospital have led some community leaders to demand increased oversight even as new complaints of patient care at Grossmont surface.

Grossmont is one of four hospitals in San Diego County assessed the maximum allowable fine by state health regulators for preventable errors that caused patient deaths, injuries, or were likely to cause serious harm.

Medicare and Medi-Cal are considering cutting their reimbursement for the hospital by October 15.  Federal, state and county regulators are currently investigating the hospital.   The hospital has submitted plans to correct deficiencies, including improving training and communications, and is awaiting a revisit by the California Centers for Medicare and Medicaid Services (CMS).

“We are looking forward to them coming out, doing a resurvey, and being confident that their concerns have been addressed,” Michele Tarbet, chief executive officer (CEO) of Sharp Grossmont Hospital, told East County Magazine.  “I’m very proud of the care that we provide at Grossmont Hospital.  We have an outstanding staff.” Grossmont has previously won national and international awards for patient care, including recognition as a magnet hospital.

Grossmont received the maximum allowable fine ($25,000) for the death of Larry Napolis, 45, a heart attack patient who died March 21 after his ventilator was left off.

On August 21, the hospital received word that it has been cleared by the state of wrongdoing in a fourth case, the death of a man who died after undergoing a tonsillectomy.  According to Bruce Hartman, manager of marketing communications at Grossmont, the tonsillectomy patient had other serious medical illnesses when he underwent surgery.

Other reported problems at Grossmont include improper use of CPR by a nurse, expired medications, an unsanitary operating room mattress held together with tape and glue, and unsafe handling of food and kitchen equipment.

Tarbet declined to comment on specific cases under investigation or what disciplinary actions if any have been taken against staff implicated in serous incidents including three preventable patient deaths.  But she added, “We’re all devastated by what occurred…Our heartfelt sympathy goes out to the families and we are working with the families directly.”

Barry Jantz, CEO of the Grossmont Health District, said he is “confident they are going to remedy the situation to make the improvements necessary so that we can continue with Medicare and Medi-Cal.”

Watchdog group and others criticize Grossmont Hospital District secrecy
Asked in a KPBS radio interview whether the hospital deficiencies were caused by poor management, unprofessional practices or staff overload, San Diego Union-Tribune editor replied, “It’s a case of all three—and also a case of a really shocking lack of oversight by the hospital board.”

The publicly elected hospital board failed to ask adequate questions and was “kept in the dark” by the hospital’s corporate board, he noted.

Directors of the Grossmont Healthcare District (GHD) have said they weren’t notified about patient-care mistakes.  A new policy adopted in August requires hospital administrators to provide quarterly reports on patient care and safety to the board, in closed sessions.  Administrators must also notify the board within a day of any patient-care incidents reported to state regulatory agencies, however that communication is required to be kept confidential.

“One of the most disturbing revelations was that this board was kept in the dark,” Sara McElravy, an elected hospital board member, attested in an August 4th meeting.  She grilled hospital representatives, asked when they learned of deficiencies and what role they played in resolving problems. “Why was the elected district board not notified and what did you intend to achieve by this omission?”

John Whalen, a retired physician, called on board members who won’t attend meetings to “resign, because you are being negligent in the performance of your duties.”  Whalen has since filed papers to run for a seat on the board.

Some patients praised the hospital and expressed support for staff.  “I just want to thank you for saving my life,” said Ronald Vaughn, who testified that he was diagnosed with West Nile Virus, the Union Tribune reported.

Ray Lutz, founder of Citizens Oversight Projects (COPs), a government watchdog organization, authored a scathing editorial in the East County Californian critizing Jantz and others.  “It was his responsibility to inform the district board of the outrageous events occurring at the hospital…should we continue to trust him with our lives?” observed Lutz, who is also a candidate for the 77th Assembly district.  “The idea of a private board hiding its problems from the public while accepting millions of taxpayer dollars is a clear example of how these public/private partnerships can go awry.”

Lutz faulted the GHD for continuing a “culture of silence” on its website by having no notices of special meetings, agendas or minutes posted for public view.  In addition, he faulted board members for failing to attend meetings or ask key questions.

His editorial praised the California Department of Health for calling attention to a “festering problem” by sounding the alert over preventable patient deaths at Grossmont.  “My opponent, Assemblymember Joel Anderson, proposed cutting 117 similar boards and commissions to save money in a January 10, 2008 press release,” he added.  “I’m just happy he wasn’t successful at also cutting the `redundant’ hospital review board.  Redundancy can be a very good thing, particularly when our health and lives are at stake.”

The citizens’ watchdog leader also said the hospital’s efforts to improve communications do not go far enough and that the level of confidentially is “excessive.”  He believes GHD board members should be allowed to report egregious violations without violating the district’s confidentiality agreement.

McElravy, in an interview with East County Magazine, said confidentiality rules have been changed to now allow designees serving on the hospital board to report back to elected board members on serious patient care problems.

She noted that the board’s role is limited since Grossmont District leases to Sharp Healthcare, which is required to provide seven core services.  “When they tried to close pediatrics before, that would have broken the lease,” she said, noting that the board prevented that action. 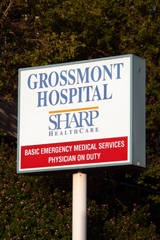 New questions raised over ER care
Charlene Ayres, long-time resident of East County, thinks the funding cut-off is “an empty threat.” She went on to detail her husband’s most recent experience at the hospital and specifically the emergency room (ER).

Richard Ayres was experiencing extreme pain in his right eye, his wife said. After waiting in the ER, he was deemed a non-emergency and sent to the back of the line. There was no specialist on call, so the ER physician could not diagnose the problem. The Ayres had to wait another hour and a half to see the specialist, who turned out to be a doctor specializing mainly in dermabrasions and botox treatments.

Before they left the room to go wait to see the specialist, they were handed a list of medications to get for treatment of Ayre’s eye—but the list was for another patient. Ayres was eventually diagnosed with acute glaucoma. The specialist performed a normally two-hour eye surgery in four hours.

Later that night, Ayre’s eye started hemorrhaging. The Ayres were told by the specialist to come in the morning and then, according to Charlene, she was asked if she poked her husband in the eye. They were referred to another doctor who finally stopped the hemorrhaging, but could not repair damage to the cornea.  Ultimately, the patient saw a specialist at Shiley Eye Center at the University of California San Diego recommended by a friend.

Two cornea transplants later, Richard Ayre’s sight was mostly saved but it will never be up to par, according to his wife. “This is not a place that you want to be if you are sick,” she said of Grossmont’s ER.

“I would be more than happy to have Mr. Ayres give us a call and sit and talk with him,” said Tarbet, who declined to comment on the case, citing patient confidentiality.  She noted that while the hospital has eye doctors on its medical staff, it is standard practice nationally for ER physicians to evaluate eye patients and refer to a specialist.  She added, “Typically eye doctors will request that patients be seen in their offices, because opthamologists have very specialized equipment.”

Quality of nursing care questioned
Among the findings of recent government investigations were complaints of poorly trained nurses.

The East County Californian received an e-mail from a former nurse who asked that her name be withheld.  Her e-mail, along with comments received from other medical professionals, suggest that Grossmont’s recent woes are part of a more systemic problem in our medical care system.

“If you think this is an isolated hospital with unique problems, then consider that Grossmont has been held up in the community as a Magnet  Hospital for nursing excellence,” said the nurse, who until recently worked at a nearby hospital.  “Every hospital whether for profit or not has in the last 20 years moved away from experience nurses managing quality assurance and daily nursing care to administrators who have never worked on the floors and whose bottom line is the most important.”

The nurse added, “The emphasis on making money to stay in existence has damaged the care of medicine in this country, and regulatory agencies are few and far between.”  Most hospitals now are run primarily on “temporary staff like traveling nurses who have no real connection,” she said, adding that “per diem staff is more prevalent than full-time.”

Hospital spokesman Hartman said Grossmont has approximately 1,100 nurses, but was not able to obtain the ratio of full-time to part-time nurses by press deadline.   But he observed, “We do not have a nursing shortage here at Grossmont Hospital.” While acknowledging that healthcare providers and hospitals are “always challenged to recruit a new crop of nurses,” he said Grossmont meets nurse-to-patient ratios required by the state.

Grossmont’s problems came to public light because of new reporting requirements for hospitals that took effect in July.  Nor is Grossmont alone; in August state regulators announced maximum fines against 18 hospitals statewide, including four in San Diego County. Other local hospitals fined included Pomerado Hospital in Poway, where a malfunctioning anesthesia machine reportedly caused patients to experience pain during surgery, Scripps Green Hospital in La Jolla for allowing a patient to fall off an operating table and sustain serious injuries, and Promise Hospital in San Diego, for allowing a person with a revoked nursing license to treat patients and teach nurses how to administer potentially danger anti-clotting medication.

Sara McInerny, staff writer, has previously served as editor of several community newspapers including the East County Californian and is currently a journal manager for a leading health and science publisher.