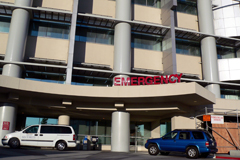 Closure of the El Cajon Valley Emergency (full service) Hospital and a Kaiser facility, both in El Cajon, have exacerbated pressures on Grossmont, East County’s only remaining hospital.  In addition, Grossmont ceased being a designated trauma center in the 1980s, leaving East County with no trauma center.  Designated trauma patients are now transported via helicopter or ambulance to Sharp Memorial Hospital in San Diego.

Those facts have left some community members ill at ease.

“We lost both hospitals within the last eight years,” said Marge Carlson, candidate for the El Cajon City Council.  Carlson has called news of recent preventable deaths at Grossmont Hospital “more than embarrassing; it is devastating.”

Carlson has launched a petition drive calling on public officials to allocate funds for a new hospital in East County.  “With the loss of two full service hospitals in El Cajon within the last five years and with the possible loss of federal funding to Grossmont Hospital (due to negligent deaths and mismanagement), the 350,000 residents of East County desperately need a full service hospital,” the petition reads. “Since no emergency hospital can be operated to make a profit, the funding burden would be on the federal, state and county governments.” (Note: according to the San Diego Union-Tribune, Grossmont actually services even more – 642,000 residents in a 750-square mile area.)

Asked if any plans are in the works for a new hospital, however, Jantz replied, “No.”  He said that the Grossmont Hospital District is not in a position to pursue such an endeavor.  “Other private interests have analyzed the issue and have come to the same conclusion,” he said, adding that cost is the key obstacle.  “This is much of the very reason that Scripps East closed, by the way.  Partly as a result, Grossmont has the busiest ER in the County.  There are no easy solutions to this dilemma, but some of the wait time issue is being addressed by the current expansion of the ED/Critical Care Tower at the Hospital, which is part of GHD’s Prop G. 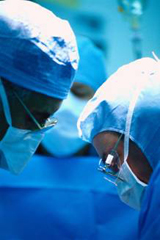 Concerns rise amid investigations, long waits in the ER
Amid state and local investigations, the ER and hospital are continuing with their construction project, which is aimed at providing some relief for the current wait times in the ER.

“Our claim to fame is that we’re the busiest ER in the county,” said Sarah Nash, nurse manager of the ER.

Even after a major remodel and expansion, wait times average five hours for Grossmont emergency patients who are released. A patient who must be admitted to the hospital spends an average of eight hours in the ER before admittance. This wait time represents the amount of total time spent in the ER, including time spent being evaluated and under the care of a physician.

“I’ve been waiting for three hours,” said another patient banging on the admittance window.

In April 2008, a patient admitted by ambulance with chest pain and breathing problems in the afternoon was forced to spend the entire night in the ER because there were no rooms available in the hospital.

Four years ago, when the ER was first re-opened after construction was finished, the ER saw 175 patients a day.  Now they are seeing more than 225 patients a day. Before the expansion, they saw 65,000 patients a year and now they serve close to 81,000. Nash contributes this to population growth, an aging population and acuity, or how sick the patients are. Since the population is older, there are more acuity and complications, so the wait time increases.

In addition, long wait times were attributed to the amount of beds available in the hospital. If emergency cases need to be admitted to the hospital but there is nowhere to put them, then they have to stay in the ER.

Tarbet said ER patients are evaluated by triage, with sickest patients treated first.  “If you present in our ER as an extreme emergency or in critical condition there is no wait,” she said, “but if you come in because your finger got caught in a window, you could wait two to four hours.”  She blamed long waits in the ER in part on “patients who chose to come to the ER instead of going to see physicians so that they don’t have to pay their bill…We have a lot of patients who don’t have physicians, and those patients do have long wait times.”

Nash mentioned that there are times in the ER when there is no wait and other times when the wait is very long. When the ER reaches capacity, the ER goes on bypass and patients are diverted to the closest ERs. This happens frequently, but only stable patients are diverted. Five percent of the year, the ER is not allowed to go on by-pass. That is something that the County regulates.

Wait times at the ER are of critical concern to many back country residents, who voice additional concerns about the length of time it would take to reach emergency care.

“I know people (back country residents) who have three different cell phones so that they can find reception in case of an emergency,” said Eleanora Robbins, long-time La Mesa resident and outdoor science program teacher for children living on reservations.

Robbins is mostly concerned with availability of anti-venin. Rattlesnake bites can have serious consequences if not treated immediately. Baby rattlesnakes will inject all their venom when they bite because they have not learned how to save it. In addition, researchers are reporting more potent rattlesnake venom and deadlier reactions across the southwestern U.S. this year, CBS reported. http://cbs5.com/pets/rattlesnake.venom.potent.2.763468.html .

Robbins is concerned that a small child will be bitten and that it will take too long to find cell phone reception, then wait for a helicopter to fly a child to the ER for treatment.

Nash’s response to this concern is that this is “the way it goes living out there.” She also mentions that depending on where the person is located, it might take 15 minutes to more than an hour to get them to the ER by helicopter after receiving the call.

Robbins believes that East County needs another ER closer to the back country, where increasing new development is occurring.

There are currently no known plans for such a project.

“I have been and continue to be extremely troubled by ER wait times. A few years ago, I was concerned about a study which showed a huge percentage of patients erroneously using ERs for non-emergencies. I initiated a countywide public awareness campaign to encourage people to use urgent care centers for non-emergency conditions in order to lessen the burden on ERs.” Second District Supervisor Dianne Jacob said in an e-mail correspondence before the recent investigation results were made public.

Hospital expansion aims to ease overcrowding
According to Congressman Duncan Hunter’s web site, there was an initiative on his 2008 budget request for $700,000. This money was slated for more patient beds at Grossmont hospital. The initiative never went forward. Hunter’s office never submitted a response to questions regarding the shelving of this initiative.

However, Sharp Grossmont’s ER is in the midst of construction projects aimed at improving quality of care and wait times in the ER.   Phase 1 of the two-phased project opened in fall of 2004 and included the completion of two bottom floors which house the emergency room and critical care facilities. The hospital added additional beds and modernized the current equipment. In addition, the ER has a new chest pain center and dedicated imaging unit to help with patient diagnosis. This part of the project cost $83.5 million, according to Sharp Grossmont Hospital’s representatives.

Phase 2 will include a build-out of levels two, four and five. There will be 24 intensive care beds and 66 regular beds located on these three floors.  Since the project’s start on November 19, 2007, approximately 27 percent has been completed. Framing is 100 percent complete on level 5, 90 percent on level 4 and 60 percent on level 2. Plumbing and electrical rough-in is about 25 percent complete overall. Opening of these levels is slated for Summer 2009.

Recently passed Proposition G, an $85 million bond, will help to fund this phase of the project. Prop. G pays for the construction costs while the hospital will pay for the equipment.

“I was glad to support Proposition G on the June 2006 ballot. The passage of that bond should help address emergency wait times in the East County, including wait times at Grossmont,” Supervisor Jacobs has stated.

Sara McInerny, staff writer, has previously served as editor of several community newspapers including the East County Californian and is currently a journal manager for a leading health and science publisher.  Editor Miriam Raftery, a national award-winning journalist with experience covering medical issues for national and local publications,  also contributed to this report.