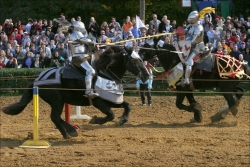 October 24, 2009 (Poway)—The medieval sport of jousting takes center stage in Poway this weekend, where competitors from around the world vie in barred jousting contests at the Tournament of the Phoenix.

The "Tournament of the Phoenix" derives its name from the circumstances surrounding the first joust event in October 2007. When the Witch Creek fires devastated Southern California the week prior to the first event, it seemed the event would have to be cancelled.  But the events’ core organizers concluded that the event should commence.

With the promoters and their Australian competitor evacuated from Ramona and living in a camp in Lakeside, more competitors and participants began pouring in from across the country and around the world. Sleeping on couches and floors across San Diego, the group rallied together and got to work.

The day of the event, hundreds of area residents turned out to enjoy an entertaining day away from the cares and worries that had plagued so many. Surrounded by a sea of smiling faces, English competitor Dominic Sewell declared, "We thought the fires would defeat us, but instead we have risen, Phoenix-like, from the flames."  Thus the Tournament of the Phoenix was named.

In its third year, the Tournament of the Phoenix has proven to be a unique learning experience as well as an exciting sporting event. Only the most highly skilled knights from around the world are invited to compete for the prize. Protected by real, museum-grade armour, they engage in a series of events which demonstrate their proficiency in many of the skills essential to the Medieval knight.

Competitive jousting is popular in counties around the world, from New Zealand to Sweden. On any summer weekend, thousands of international fans flock to tournaments where men in armour engage in no holds barred competition.

In the past, Americans had to settle for staged theatrical shows, but no longer. At events sanctioned by the Royal Armouries of England and affiliated with the International Jousting League, WorldJoust Tournaments™ brings world-class competitive jousting to US fans.

Students and their families can learn about the history of knights and the society they lived in from men who know firsthand what it takes to be a real knight. They can discuss topics such as chivalry, the knight’s code of honour, what it is like to wear and use armour, the role of horses in the Middle Ages and other fascinating topics from real live knights. This year’s featured guests include Dr. Tobias Capwell, Curator of Arms and Armour at the Wallace Collection in London, and Scott Farrell of the award winning ‘Chivalry Today’ program. This year the event expands to include a Festival of History featuring living history presentations from the Romans to the Renaissance.

Swimming Pool Hertfordshire - We’re home to some of Hertfordshire and Buckinghamshire’s best equipped, most friendly and affordable health, leisure, sports and arts facilities.